My cousin recently posted family photos on Facebook of her ancestors – all veterans – who served over the years. I recognized all of them instantly as I already have these same photos in my family tree – all, that is, except one photograph.

Who is the guy in the Civil War uniform?

I didn’t recognize him, so I replied to her post on Facebook to learn more about his story. She told me it was her 2nd great-grandfather, John Tyler Webb (1841-1872).

“He and his five brothers served through the war. They were a good portion of the brass section of the Regimental Band (the regiment changed numbers through the war – it was originally the 1st, then the 10th Maine, and finally the 29/30th, which finished the war in Louisiana. John played Baritone, which we have.”

His baritone horn has survived and been passed down in the family?

Cool. So, I wrote her and asked for a photo. This is what she sent: 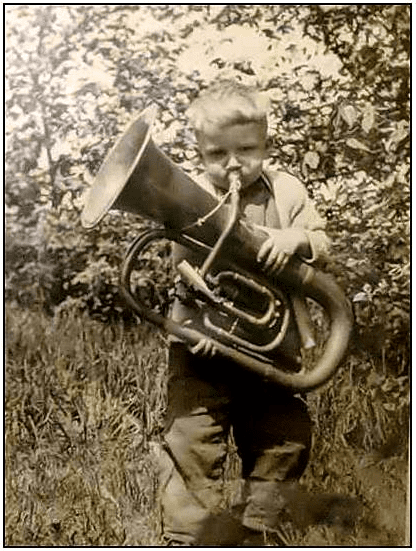 Priceless – this is Allen Pierce Richmond (1921-2010) as a boy playing that heirloom baritone horn.

She also told me:

“He was [also] helping men in the regiment get new boots. His father was a bootmaker and John traced men’s foot shape and mailed them home and Dad mailed back completed boots. John died after the war on a leather-buying trip to St Louis.”

I checked GenealogyBank’s Historical Newspaper Archives to find articles on John Tyler Webb and I found these two articles.

This article reports that after the war, John was “manufacturing about 300 pairs [of boots] a day.” The article goes on to say that he had a large operation with over 20 employees and that his father, Col. James Webb (1798-1882), “although over 70 years of age,” was still manufacturing boots in the same location “where he had been over 40 years.”

The newspaper clipping also mentions his Civil War service and that of his brothers.

I also found this obituary for him.

It is not always obvious, but Facebook is the largest family history Internet site online today. I use it constantly to communicate with cousins and to gather family history information and photos.

Digging deeper, I wondered if I was related in any way to John Tyler Webb. So, I went to FamilySearch and looked at their “View My Relationship” feature – it quickly showed that we are 5th cousins. Click here to see if you are related to John T. Webb of Bridgton, Maine.

GenealogyBank is your source for documenting your family history.

On This Day: Custer Destroyed Black Kettle’s Cheyenne Camp on the Washita

An article about the Battle of the Washita on 27 November 1868, when George Custer…
Previous Post

One thought on “Wait, Who Is the Guy in the Civil War Uniform?”