Introduction: Mary Harrell-Sesniak is a genealogist, author and editor with a strong technology background. In this guest blog post, Mary provides another fun quiz to test your knowledge of terms used in old newspapers to describe our ancestors’ diseases and medical conditions—and then provides illustrated definitions of those terms.

Although this old ballad doesn’t have anything to do with medical conditions, it describes my feelings precisely when I encounter accounts of diseases such as tetters, scurf and morphew in early newspapers like this 1736 advertisement.

“O Dear,” I think, “Are these strange diseases of yesteryear, or something we might contract today?”

The truth is somewhere in the middle.

Many of these early diseases are now sub-categorized into specific medical diagnoses, while others still exist but under new names. For example, in the 1736 newspaper advertisement above, Mrs. Edwards advertised products to cure tetters, a skin condition, which today describes the symptoms of eczema, herpes or ringworm.

What if you find an obituary or newspaper article about one of your ancestors that names a disease or medical condition using old terms you’re not familiar with? It’s important to understand the meanings of these early medical terms—otherwise you might miss an important piece of your family history.

Test your knowledge of these old diseases and medical conditions with this fun Early Medical Terms quiz. Match the old medical terms in the first column with the definitions on the right. The answers can be found at the bottom of the quiz. If you miss any, be sure to read the rest of the blog article—which provides definitions for these early medical terms as illustrated in historical newspapers. 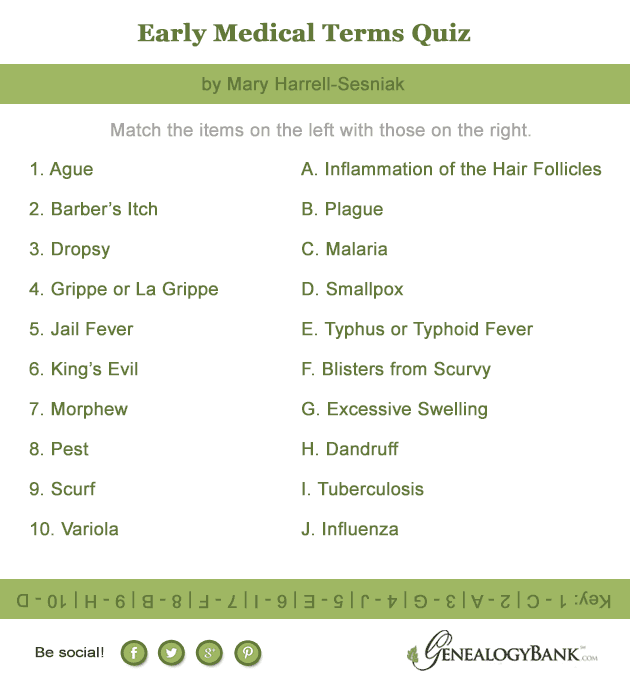 Acites or Ascites: In 1849, Sand’s Sarsaparilla was recommended as a permanent cure for a wide variety of illnesses, including acites, probably the same as ascites or abdominal swelling.

Ague: This is another term for malaria, a disease often spread by mosquitoes, as noted in this 1875 account by J. G. Truman.

Barber’s Itch: This is an inflammation of the hair follicles, typically affecting the area around a man’s beard. It may be caused by eczema or ringworm.

Biliousness and Bilious Fever: This ailment described a variety of gastric illnesses, ranging from nausea to bile disorders of the gall bladder or liver, as seen in these two advertisements from 1920 and 1840.

Dropsy: Dropsy is edema or excessive swelling, a common ailment, which afflicted former Texas Governor James S. Hogg in 1905. Another reference to edema was anasarca.

Grippe or La Grippe: The grippe is another name for the flu or influenza. In 1843, opponents of President John Tyler coined a variation of the disease: “The Tyler Grippe.”

Jail Fever: This is an early term for typhus or typhoid fever, which often spread quickly in confined areas such as jails. In 1828 there was a report of jail fever at the Bellevue Penitentiary in New York, which also sickened the “keepers” and physicians.

King’s Evil: In the above example for Acites, the advertisement referred to King’s Evil, which indicated tuberculosis, scrofula or glandular swelling.

Morphew: Morphew was a type of blisters, often associated with scurvy, a vitamin C deficiency. (See the 1736 Mrs. Edwards advertisement above.)

Pest and Pest Houses: Also known as the “Black Death,” the pest is another name for the plague, a highly contagious and fatal disease. In 1782, when smallpox was prevalent, a reference was made to pest houses, which were “situated as not to endanger travellers.” In this sense, a pest house was a type of isolation dwelling or hospital where a person with any contagious disease might be housed.

Scurf: This is another medical term for dandruff, or cradle cap when applied to babies.

Tetters: This is a broad description of a variety of skin diseases, such as eczema, herpes or ringworm. (See the 1736 Mrs. Edwards advertisement above.)

Variola: This was another name for smallpox, and often describes a mild form of the affliction. In 1773, variolae patients from Nevis did not wish to be inoculated, as this was an “extraordinary infringement of their liberty.”

First settled in 1841, Dallas, Texas, was not incorporated until February 1856. However, GenealogyBank has…
Previous Post