Introduction: In this article, Mary Harrell-Sesniak provides some good advice for planning your next family reunion, and searches old newspapers to show how reunion notices about past family gatherings can fill in details on your family tree. Mary is a genealogist, author and editor with a strong technology background.


As winter is waning, start thinking about organizing your family’s annual reunion—and if you desire a strong attendance, don’t delay.

Not only are they a lot of fun, but family reunions are a goldmine to genealogists. Present-day family reunions provide a great opportunity to talk to your extended family, while records and newspaper notices about past family reunions can fill in details on your family tree—and provide plenty of clues for further family searches.

Imagine the fun and lively family history conversations that were had at this large family reunion:

To make sure your family reunion is a success, plan it carefully, including:

Ask family members to contribute memories, family history records and genealogies. To make the reunion memorable, do it in a grand style.

Family Records of Past Family Reunions

If you’ve done genealogy research into past family gatherings, present those stories at your upcoming reunion. Whether your family was large or small, or met formally or informally, many members kept records such as letters, diaries, etc., of these family reunions in the past to document what occurred. Try to track down these old records of past family reunions and look for the following information:

Be sure to look for family reunion notices when searching a collection of newspapers, such as GenealogyBank’s online Historical Newspaper Archives.

How to Search for Reunion Notices in Newspapers

The first thing you’ll want to enter on the newspaper search page, of course, is your family surname. Combine that with each of these related keywords to see which combination gives you the best results:

To find some interesting family reunion notices to show you, I entered “family reunion” in the keyword field on GenealogyBank’s search page, and chose a date range of 1700-1875. 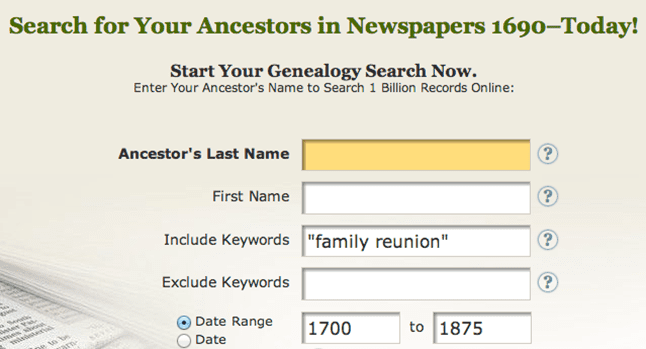 This newspaper search turned up many interesting family reunion notices. Some centered on special occasions, such as a progenitor’s birthday. Others celebrated family milestones, such as honoring the first of the family (progenitors) who settled in an area.

An example of the latter type of reunion notice is this one, a family gathering to honor Edward Rawson, who was the secretary of the Massachusetts Bay Colony.

According to the following notice, his clan held their first annual reunion in 1872.

One of the most widely-reported reunion announcements was for a gathering of the descendants of John Eliot (c.1604-1690), described as the “Apostle to the Indians.” If you examine the 228 query results from a search in GenealogyBank, you’ll soon discover a wealth of history surrounding him.

Some newspaper family reunion notices consist of invitations, and others may be brief or detailed recaps of the actual reunion.

And don’t neglect to consider other types of reunions and social gatherings, as not all were centered on families. Organizations, military groups and even towns, such as Otisfield, Maine, brought people together for camaraderie and celebration.

Here’s another example of a newspaper reunion notice, this one for a gathering of the McMillan family.

To help you find reunion notices about your family, I’ve compiled this list of reunion notices I found while doing research for this Blog article. The accompanying notes are a brief summary of information reported in each notice.

Guide to Family Reunion Notices through 1875

How to Research Your Ancestor’s Part in Major Historical Events

Introduction: In this article, Gena Philibert-Ortega shows how researching the major historical events that happened…