Did your ancestor fight at the Battle of Monmouth during the Revolutionary War?

My cousin Joel Pratt (1752-1844) did and his obituary records some of his personal recollections of that battle.

At the battle of Monmouth…he saw Gen. Lafayette …say, with his foreign accent, “Hold up your heads, my lads, we’ll pick at the fine clothes by and by.”

That must have been really cool.
Calling the Brits the “fine clothes” – the men would have loved that; a touch of Mel Gibson or John Wayne. A great line – glad I found it recorded in his obituary.

I wonder who else fought with him at the Battle of Monmouth? Are there more memories of the battle recorded in their obituaries?

Did these soldiers’ letters or diaries from that battle survive? Are these personal writings available and online today? Perhaps some of these old documents even mention my cousin, Joel Pratt.

One way you can find the answers to those questions is by searching the old newspapers by keyword for mention of the Battle of Monmouth. 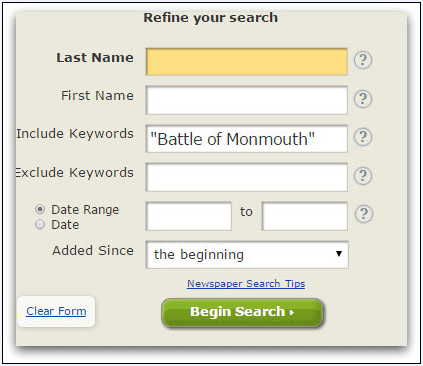 For example, a quick keyword search in GenealogyBank’s Historical Newspaper Archives for “Battle of Monmouth” generated over 3,300 search results. 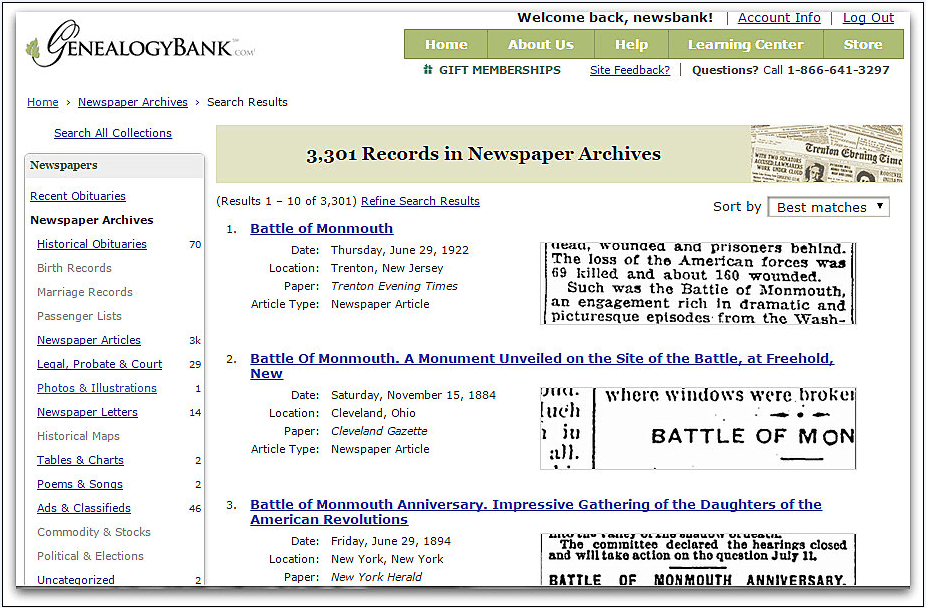 Great – that gives me a lot of relevant historical newspaper articles to go through.

I can sort this list of old newspaper articles chronologically and read about the battle as it happened – or I can read through them by topic. For example, I can look at the 70 obituaries that are cited to see what information is given in each one. 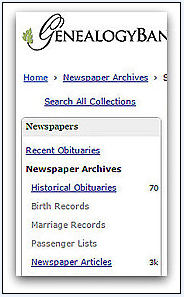 His obituary tells us that:

In Captain Ephraim Whitaker’s (1755-1846) obituary published in the North American (Philadelphia, Pennsylvania), 16 July 1846, page 1, we learn that he was also in the Battle of Monmouth.

The battle of Monmouth was fought on one of the hottest and most sultry days in June (28th). Captain W. bore his full share in the heat, burden and danger of the day; he received a shot through his cap and another through his canteen, spilling the liquor with which it had been supplied in the morning.

He enlisted at the age of 20, and was at the battle of Saratoga and taking of Burgoyne. He continued in the army till the battle of Monmouth, in June, 1778, when he was discharged on account of the wounds he received on that occasion.

Going through each obituary, you learn about the lives of real men, the real stories of those that fought in the battle with Joel Pratt.

Newspapers are published every day, 365 days a year.
Look and find your ancestors’ stories and the experiences of those who fought with them.

Introduction: Mary Harrell-Sesniak is a genealogist, author and editor with a strong technology background. In…
Previous Post

How to Research Legal Notices in Newspapers for Genealogy

In this article, Gena Philibert-Ortega shows how legal notices published in old newspapers are a…