Introduction: Mary Harrell-Sesniak is a genealogist, author and editor with a strong technology background. In this guest blog post, Mary provides a fun quiz to see how well you know the U.S. Social Security Administration (SSA)—and the Social Security Death Index (SSDI) it maintains, an important resource for genealogists. Mary uses old newspaper articles to learn more about the SSA and SSDI.

One of the exciting features of GenealogyBank is the ability to search the Social Security Death Index (SSDI). This important genealogical database is updated by the United States Social Security Administration (SSA). GenealogyBank’s SSDI search page provides an easy way to access this data. 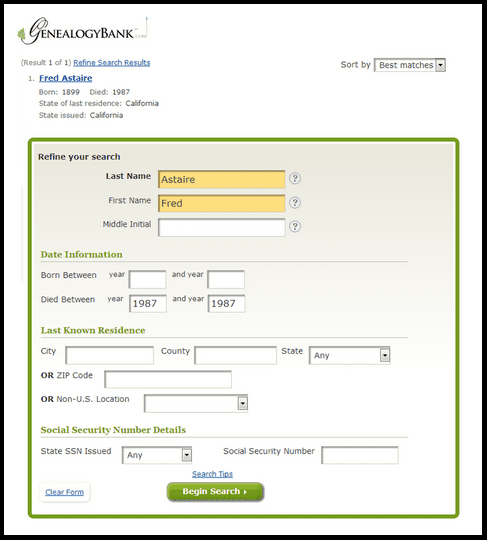 Not all the fields on the search page have to be filled in, and some of GenealogyBank’s SSDI features are the ability to:

Data from the U.S. SSDI is frequently misinterpreted. If you think you are well versed in the subject, try this handy Social Security Genealogy Quiz and then check your answers below. 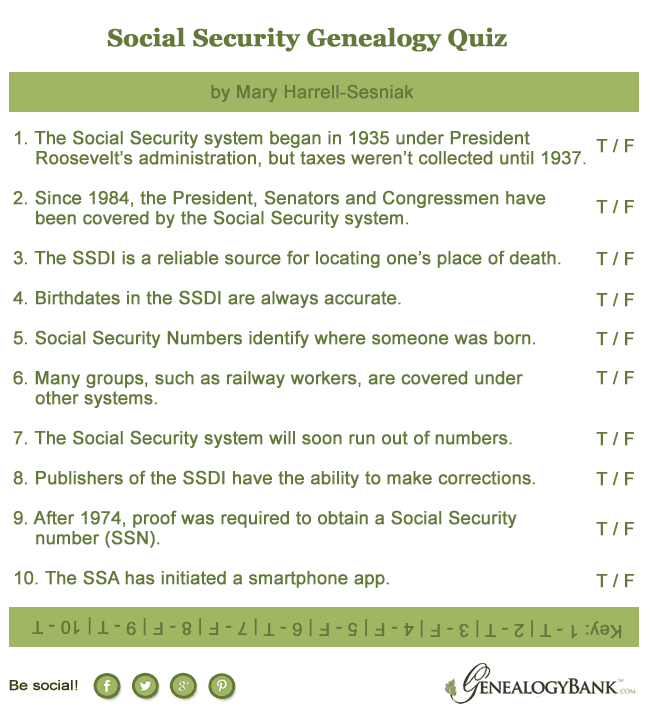 When did the U.S. Social Security Administration (SSA) system start?

President Franklin Delano Roosevelt signed the Social Security Act on 14 August 1935, but taxes for the system were not collected until January of 1937. For more information about the history of the Social Security system in America, see www.ssa.gov/history/hfaq.html.

Who is covered by the Social Security program?

Many groups are/were exempt, including railroad workers, and certain employees of state and local governments and schools.

Does that include the President, Senators and Congressmen?

“All members of Congress, the President and Vice President, Federal judges, and most political appointees, were covered under the Social Security program starting in January 1984.” 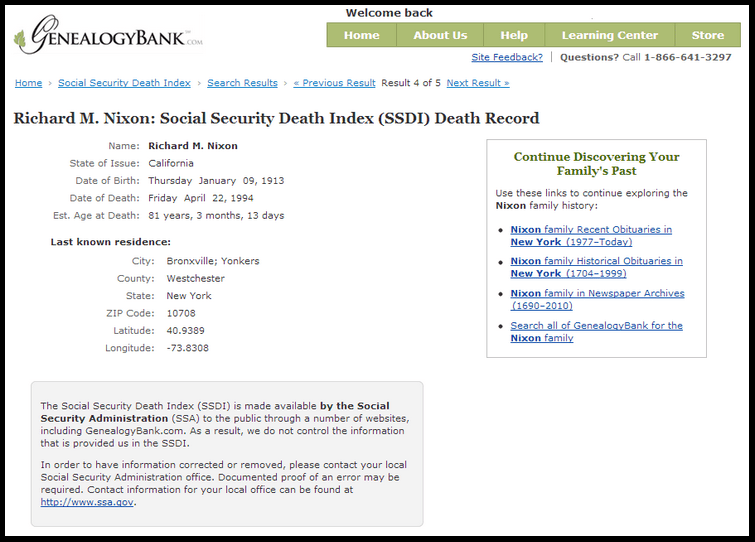 Is the SSDI’s birth and death information reliable?

After 1974, proof was required to obtain a Social Security number (SSN). For persons who entered the system prior to that date, one should cross-reference birth dates with other records. Death dates are more reliable, as proof of death (such as a death certificate) has to be submitted in order to claim a death benefit.

Does the SSDI report the location where a person passed away?

No. It reports the last known place of residence, or the final address where Social Security benefits were sent.

What are the three parts of a Social Security number (XXX-XX-XXXX)?

The three parts are, in order:

The SSA maintains a table explaining the assignment of the numbers. For instance, Alabama was assigned numbers from 416-424, and Louisiana 433-439. However, the location doesn’t necessarily indicate a residence, and could indicate a variety of locations—ranging from where one applied for a card (not necessarily one’s residence) to an office that processed the application.

“Until 1972, the area number indicated the location (state, territory, or possession) of the Social Security office that issued the number. When the numbering system was developed, one or more area numbers were allocated to each State based on the anticipated number of issuances in the State. Because an individual could apply for a SSN at any Social Security office, the area code did not necessarily indicate where the person lived or worked. Since 1972…[the] area code now indicates the person’s State of residence as shown on the SSN application.

“The group number has no special geographic or data significance. It is used to break the numbers into blocks of convenient size for SSA’s processing operations and for controlling the assignments to the States.

“The last four digits, the serial number, represent a numerical series from 0001-9999 within each group…”

Will the SSA run out of Social Security numbers (SSNs)?

It is not known how many Social Security numbers have been issued. However, the nine-digit system allows for nearly one billion SSNs, so the current system has not run out of numbers.

Does the SSA reuse numbers?

No, although some people claim they do.

Does GenealogyBank have the ability to make corrections in the SSDI?

No. The Social Security’s Death Master File Data is supplied to publishers of the SSDI, so corrections have to be addressed with the U.S. SSA. GenealogyBank has no method to process updates to this government-supported system.

Does the SSA have a smart phone app?

Yes, although it does not include the Social Security Death Index.

“…the agency is offering a new mobile optimized website, specifically aimed at smartphone users across the country. People visiting the agency’s website, www.socialsecurity.gov, via smartphone (Android, Blackberry, iPhone, and Windows devices) will be redirected to the agency’s new mobile-friendly site. Once there, visitors can access a mobile version of Social Security’s Frequently Asked Questions, an interactive Social Security number (SSN) decision tree to help people identify documents needed for a new/replacement SSN card, and mobile publications which they can listen to in both English and Spanish right on their phone.”

Note: if you experience issues with the SSA app on your smartphone, you can give Social Security a call (1-800-SSA-1213) to get help troubleshooting the issue.

Genealogy Song: ‘I Think I Hear a Woodpecker Knocking at My Family Tree’

If you’re researching your family roots in Alabama, I suggest you rely on two online…