December 6, 2011
Share
Researching Genealogy with Military Records and Lists in Newspapers
From the Revolutionary War to Pearl Harbor to Iraq, newspapers are a valuable resource for researching your military ancestry and learning about the history of war in the United States. Newspapers have been a dependable source of information that Americans have relied upon throughout this nation’s history.
U.S. War History in Newspapers
This was vividly demonstrated after Dec. 7, 1941, when Japan’s attack on Pearl Harbor launched the U.S. into World War II. The next day Congress declared war on Japan—and Americans were riveted by the bold headlines and news stories splashed across the front pages of the nation’s newspapers.

Omaha World Journal (Omaha, Nebraska), 8 December 1941, page 1.
Newspapers tell us what happened every day of our ancestors’ lives.
From the Revolutionary War to the wars in the Middle East, newspapers let us read about our ancestors’ participation in the nation’s conflicts—and what the country as a whole went through. We volunteered, we were enlisted in the U.S. military through the draft—and when we didn’t register for the draft, the government issued “slacker lists” to encourage full participation in the war.

U.S. Military Draft Lists
Military draft lists were published in newspapers, like this one 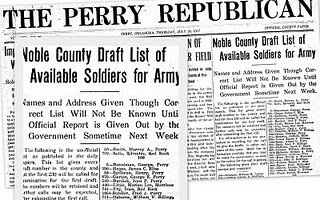 printed in the 26 July 1917 issue of the Perry Republican (Perry, Oklahoma), page 1. It is a census of the men living in Noble County, Oklahoma, in 1917—a valuable genealogical resource to help with your family history research.
Similar lists were the “slacker lists” or “draft dodger lists”: listings of those persons that tried to evade the draft. After World War I the United States War Department issued lists of those men that did not register with the military draft. 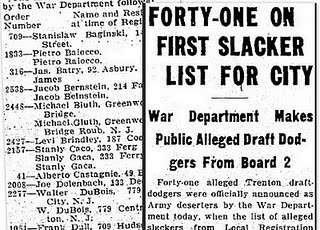 These lists were widely published in newspapers across the country, like this example from the Trenton Evening Times (Trenton, New Jersey), 25 May 1921, page 1.
From the declaration of war through obituaries published decades after the conflict ended, newspapers have been a dependable source of information about our ancestors and their participation in the United States Armed Forces. Newspapers reported on the battles and covered the stories of the war every step along the way. Family historians can gather facts for their family trees and put them in the context of the war as it happened.
U.S. Military Casualty Lists
Another valuable resource for family historians are the war casualty lists many newspapers published. 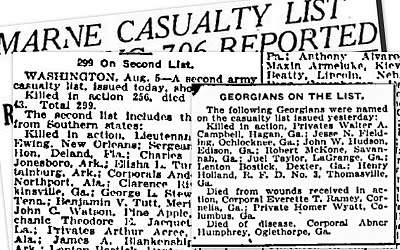 In this example, published in the Macon Telegraph (Macon, Georgia), 6 August 1918, page 1, the newspaper published the full casualty list and spiked out the Georgia men that died in a prominent boxed note that appeared on page one.
Most U.S. citizens do not remain in the military as a lifelong career. 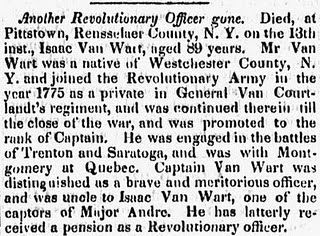 However, their military service was almost always mentioned in their obituary notice—as in this example, published in the Barre Gazette (Barre, Massachusetts), 31 July 1840, page 2, of the late Isaac Van Wart (1751-1840) of Tarrytown (Westchester County) and Pittstown (Rensselaer County), New York. Obituaries, birth announcements and marriage notices are some of the excellent resources newspapers provide family historians. During times of war, draft, slacker, and casualty lists are another helpful genealogical resource. In addition to information about your individual ancestors, newspapers provide the stories about what the entire United States was going through, to help you put your ancestors’ experiences in context and thereby come to understand them a little more. Digital newspaper archives online have become the core tool for modern genealogy, helping genealogists and family history researchers discover more about their family’s military past than ever before possible.

GenealogyBank’s huge newspaper archives of over 5,700 titles has plenty of newspapers for the Springfield,…