Introduction: In this article, Mary Harrell-Sesniak searches old newspapers to find jokes about newspapers, editors and printers – giving us a glimpse into our ancestors’ sense of humor. Mary is a genealogist, author and editor with a strong technology background.

I reckon some of our readers give presentations about their family history research using articles they found in GenealogyBank’s Historical Newspaper Archives – and I also surmise that a few of these genealogists spice up their presentations with old-time newspaper jokes they found while doing that research. 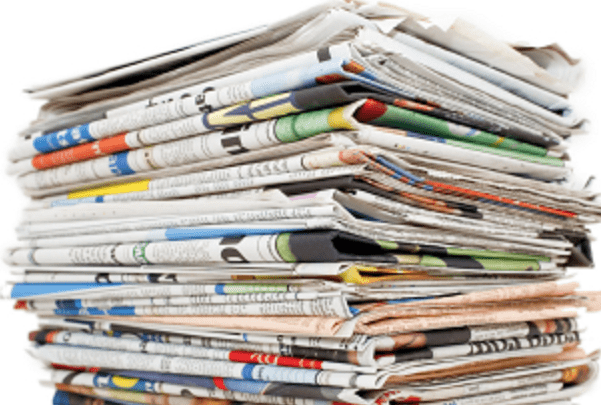 Jokes printed in newspapers, as a rule, can be tricky to find. They are often interspersed among other articles or listed under headings we don’t usually think of, such as “conundrums.” That is why, when I stumble upon jokes when doing my research in newspapers, I clip them for later use.

Here are a few of the newspaper jokes I have found, which you are welcome to use in your own genealogy presentations – or simply enjoy for yourself.

Judging from all the jokes about newspaper editors, they loved poking fun at themselves. This one notes that an editor is like a barber:

Because he is a clipper.

Another joke about newspaper editors, which was repeated in numerous papers, asked:

Why is an editor like the book of Revelation?

And then there is this joke, equating an editor to a hog:

Because he is confined to his pen.

It is no surprise that newspaper printers were much admired – and at the same time made fun of.

There are three jokes in this newspaper article about printers, with a fourth joke about newspapers:

Why is a newspaper like a tooth brush? Because every body should have one of his own and not borrow his neighbor’s!

This entry wasn’t the grand prize $5 winner, but it did merit mention in this newspaper article:

Why is a newspaper like molten lava?
’Cause it is read all over.

A newspaper offered its readers a prize for providing the best answer to this question:

Every man should have one of his own and not be rushing after his neighbor’s.

Readers: Help us find the funniest joke or cartoon about newspapers in GenealogyBank’s Historical Newspaper Archives (no off-color ones please.) Let us know what you found in the comments section below.

Presenters: If the only joke you can think of about census records is that old one about “coming to your senses,” then see how many different newspaper and genealogy jokes you can find in GenealogyBank’s Historical Newspaper Archives. Such jokes can help enliven your next genealogy presentation.

And don’t forget other topics! You’ll find a unique selection of jokes on political events, migration, and many other historical topics.

I’ll leave you with this final joke:

Why is a newspaper route like a lawn mower?
Aw, ’gwan, that’s easy. You’ve got to keep pushing if you want to get results.

Please Tell Me This Old Newspaper Article Is a Joke