Introduction: In this article, Mary Harrell-Sesniak shows how a “Search by Date” feature can help you better research historical newspaper archives. Mary is a genealogist, author and editor with a strong technology background.

If you’ve been following my “Iconic Newspapers” blog articles (see links below), you’ll note that I have looked up the first editions of early American newspapers. But how do you know when a newspaper was initially published?

My first inclination to determine these dates was to search Chronicling America (a Library of Congress website) – but then I found that GenealogyBank was one step ahead of me. All I had to do was to search GenealogyBank by date. Let me explain the steps.

Your first step is to go to the top menu and select Browse > Newspapers by Date. (Of course, you can also browse newspapers by State or Title, as you would expect, as well as by Recently Added Content.) 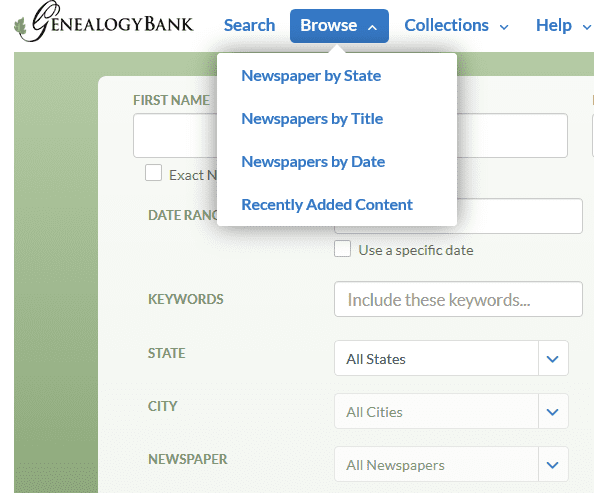 From there, you’ll be presented with a series of cascading menus showing each state. 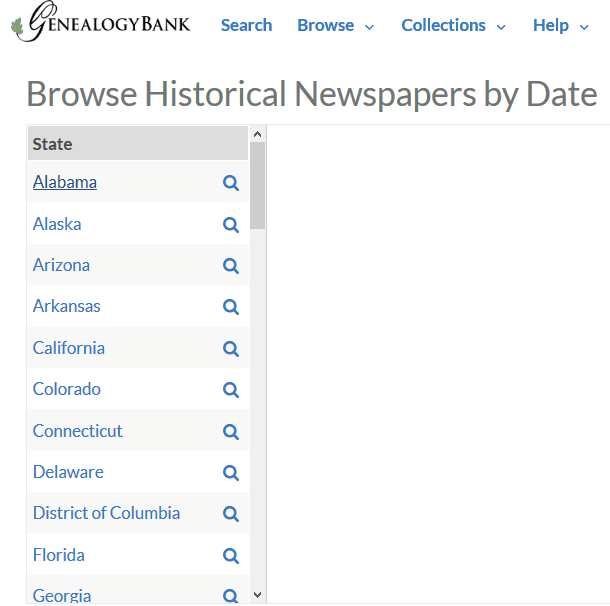 Let’s say you wanted to research the first edition of the Boston Gazette. I chose the state (Massachusetts), which then presented a list of the cities in Massachusetts. 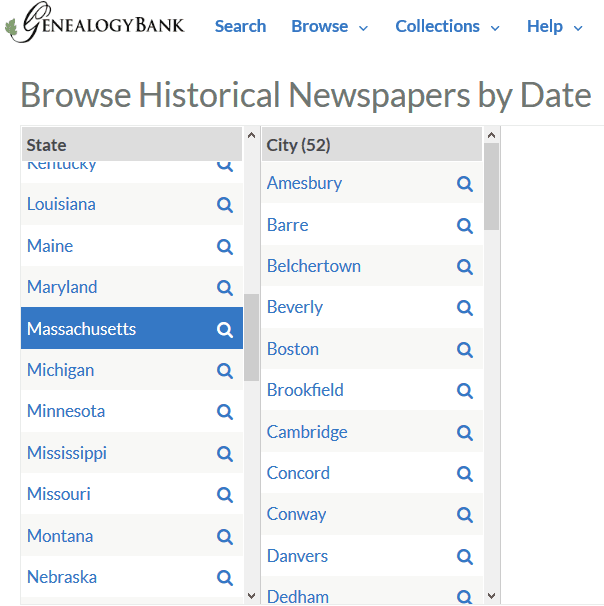 Next, I chose the city (Boston). To no surprise, there are over 200 Boston newspapers in the archives. 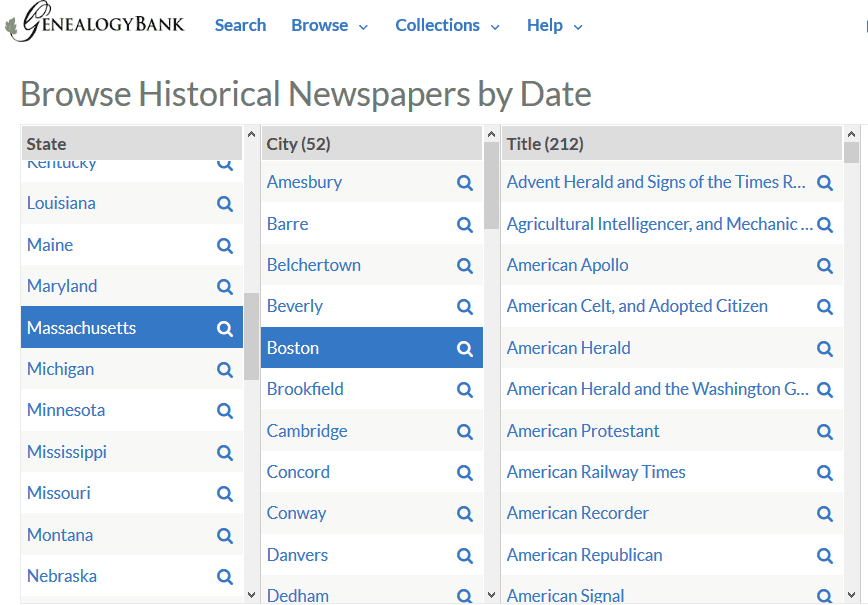 I scrolled down and selected the Boston Gazette. 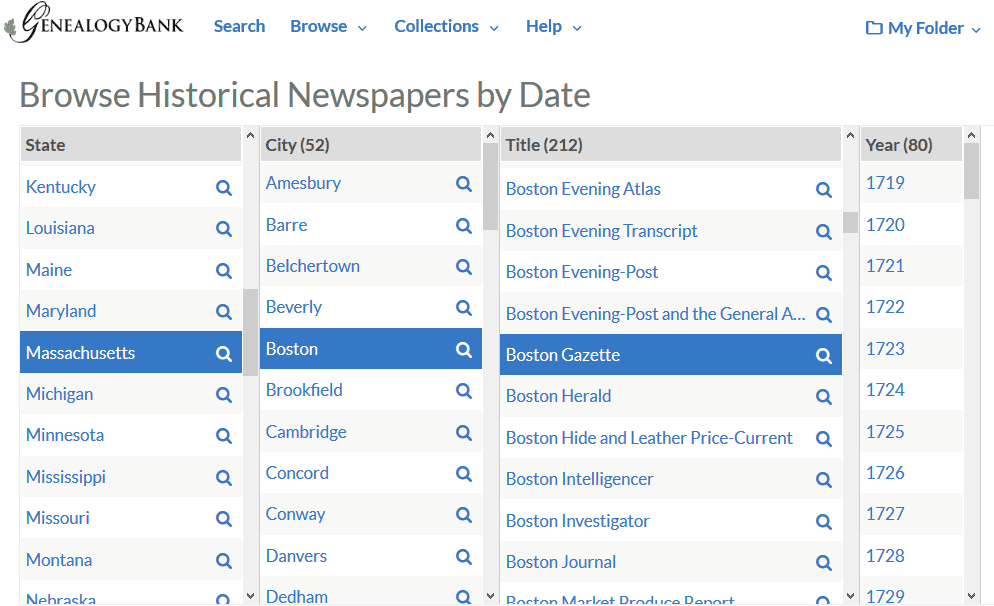 Next you see a list of all the years the selected newspaper was published (in the case of the Boston Gazette, 80 years). Selecting on any given year shows you the months that paper was published that year. When I chose the Boston Gazette’s first year (1719), it showed that it was only published in December that year. Selecting December showed it was only published once that month, December 21 – and that was the first edition of the newspaper. The list also showed there were two pages in that first edition – selecting either page link calls up that actual page of the newspaper. 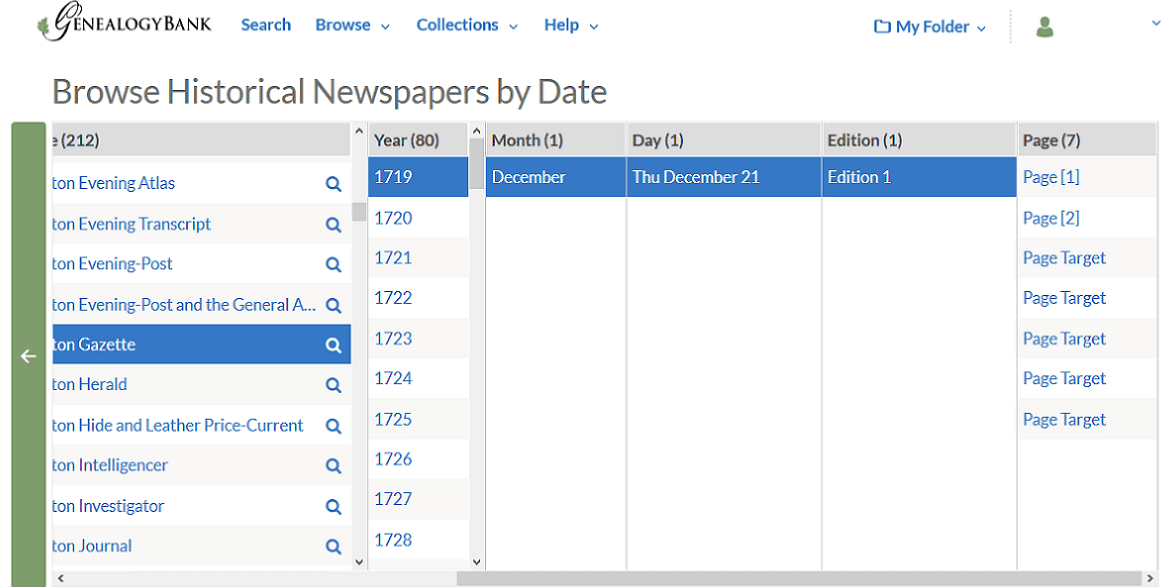 The rest of the Page List has links identified as “Page Targets.” These are notes on the filming of the newspaper for digitization. When in a hurry, most people forget to explore these notes – but if you are a diligent researcher, you might find an important tip such as this one about the interpretation of dates prior to the Gregorian Calendar adoption.

Challenge Yourself with These Exercises

1) Now that I’ve shown you how to find the first edition of the Boston Gazette, repeat the process to determine when the last edition was published.

2) Explore your home town or that of an ancestor. Do you know all of the available newspapers from that town?

3) Which newspapers were published in nearby towns during your ancestor’s lifetime. They might contain information useful to your family history and genealogies.

In this article, Gena Philibert-Ortega gives 10 tips for overcoming the frustrating brick wall that…
Previous Post

Two Scholars, One Celestial Event: The 1769 Transit of Venus

In this article, Melissa Davenport Berry tells the story of two men who carefully observed…