Introduction: In this article—on the 47th anniversary of football’s first Super Bowl—Scott Phillips searches old newspapers to find stories about the beginnings of this uniquely American sporting event. Scott is a genealogical historian and owner of Onward To Our Past® genealogy services.


While there are older football bowl games such as the Rose Bowl (which just played its 100th game, and where I am happy to report “my” team, the Spartans of Michigan State, won), to most football fans worldwide the real “Granddaddy” of them all is simply known as the Super Bowl.

But wait, you might say that there had to be football champions before 1967! Indeed there were—and here is the genealogy of what has now become one of the biggest sporting events in the world, a huge commercial success and, according to some sources, the second-largest day for food consumption in the United States behind only Thanksgiving (good thing the Super Bowl is #2 since Thanksgiving is my personal favorite holiday and I am glad it is still #1 in something).

So when did professional American football start? The National Football League (NFL) as we know it has existed since 1920. However the first “pro” football player goes back far beyond that year. The first professional football player was a standout athlete from—of all places—Yale University, and was named William (Pudge) Heffelfinger. In 1892 he received a $500 payment from the Allegheny Athletic Club to play against the Pittsburgh Athletic Club.

You can read about football’s first “pro” in this entertaining article from a 1982 Ohio newspaper.

But now back to the Super Bowl.

For decades before the first Super Bowl, the NFL fought off many competitors. However, in 1960 a new league, the American Football League (AFL), presented itself as a serious and strong competitor to the NFL. Competition between the two football leagues got downright nasty at times, as you can see in this 1960 Texas newspaper article.

In 1966 the two leagues agreed to merge, effective 1970. It was also decided that the two competing leagues would play for a championship at the end of the season, and both sides agreed that this competition would continue after the merger.

How Did the Super Bowl Get Its Name?

Believe it or not, it was an 8-year-old girl who had a significant role in naming that first championship game in 1967, after the completion of the1966 season, the “Super Bowl.” This nugget of football history was something I did not know until I read this 1977 article from a Virginia newspaper. It seems that the daughter Sharron of the then-owner of the Kansas City Chiefs, Lamar Hunt, was playing with a Super Ball and suggested to her father that the football championship game be called the “Super Bowl”—and so the name of the game was born!

Right off the bat (or, more appropriately, the arm of Green Bay quarterback Bart Starr) the Super Bowl was BIG! On the day of the game, the headline in this 1967 Massachusetts newspaper blared: “Super Sunday—Here At Last!” The news article wondered: “Will it be the SUPER BOWL or the BLOOPER BOWL?” I guess we all know the answer to that! It was a success, as told by the fact that this year we will witness Super Bowl XLVIII.

I did get some surprises when I read this 1967 article from a South Dakota newspaper. It seems that everything about that first football championship game was not immediately “super.” The article reported that: there were some 30,000 empty seats at the first Super Bowl; not one, but two, television networks (NBC and CBS) televised the game; and “the price scale was too high for the average fan. Tickets ranged from $6 to $12.” Contrast this with the current prices listed by the ticket reselling website StubHub! for Super Bowl XLVIII: tickets range from $2,524 for a single seat in the upper end zone to $525,022.50 for a “level 6 suite”!

Beginning from a somewhat less-than-super start, the Super Bowl has now fulfilled its promise and practically become a national holiday in the U.S. The financial aspect of this legendary football event has become enormous. In 1977, just 10 years after the first Super Bowl, this North Carolina newspaper reported that Super Bowl XI was expected to result in an economic impact of “between $85 and $105 million.” (Last year the University of New Orleans estimated that Super Bowl XLVII resulted in a net economic impact of $480 million for the New Orleans area.)

As you begin your preparations for this year’s Super Sunday and Super Bowl LXVIII, I suggest you might want to take a few minutes and have some pre-game fun with this trivia challenge from a 1990 Illinois newspaper. It has a dozen questions that just might stump even the most diehard football fan at your party.

From the same issue of the Chicago Metro News, these trivia answers were provided. Keep in mind these answers were current in 1990. 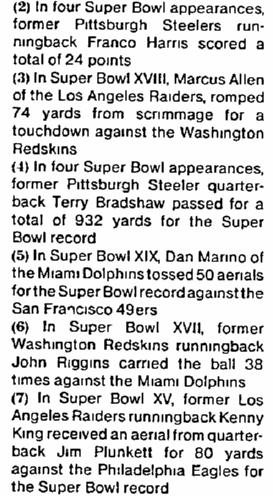 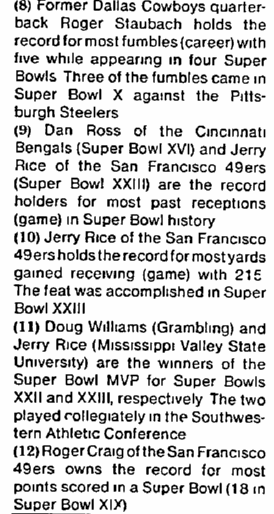 Explore these humorous epitaphs of famous people as well as the every day Joe. Put…
Previous Post

In this article, Duncan Kuehn provides a guide to understanding your ancestors’ middle names, and…