Introduction: In this article—in celebration of November being Native American Heritage Month—Gena Philibert-Ortega searches old newspapers to find stories about U.S. First Lady Edith Wilson and her connection to her famous Native American ancestor, Pocahontas. Gena is a genealogist and author of the book “From the Family Kitchen.”

Who can claim that they are apart of the Pocahontas lineage? At least one First Lady, numerous politicians, and even Confederate General Robert E. Lee, to name just a few. It was estimated in the 1980s that Pocahontas’ descendants probably numbered around 250,000. According to genealogist Gary B. Roberts, those who claim this lineage are through the Bolling family line, which are the only known descendants traced beyond the early 18th century.*

One American whose Pocahontas lineage was well reported was Edith Bolling Galt Wilson, the second wife of U.S. President Woodrow Wilson. From the time she became engaged to the president, her family history was a frequent topic in the newspapers.

This 1915 newspaper article provides some information about Edith’s family history. It reports that ever since the engagement was announced “there has been a live inquiry for the correct data.” The article provides that data by tracing Edith’s direct line to Pocahontas and proclaims Edith Bolling Galt the ninth in descent from Pocahontas. [Note: the article erroneously states that Pocahontas married Thomas Rolfe; her husband’s name was John Rolfe, and their son’s name was Thomas.]

In writings about Boiling family history, emphasis was placed that someone with “Indian blood” would now reside in the White House. This announcement about Edith’s lineage was also the catalyst for impromptu history lessons found in newspapers across the country. The short life of Pocahontas has been retold often, and—as with any well-told story—inaccuracies creep in. This old newspaper article provides readers with information and images reportedly of Pocahontas.

The widow Edith Bolling Galt married President Woodrow Wilson in December 1915. Undoubtedly, any presidential wedding results in gifts from a diverse range of well-wishers. The Wilson wedding was no different.

According to this 1916 newspaper article, one item that Woodrow Wilson’s wife received was a Pocahontas statuette presented by the Pocahontas Memorial Association. The article points out that Edith Galt Wilson was related to Pocahontas through her paternal line.

The news article included this picture of the Pocahontas statuette. 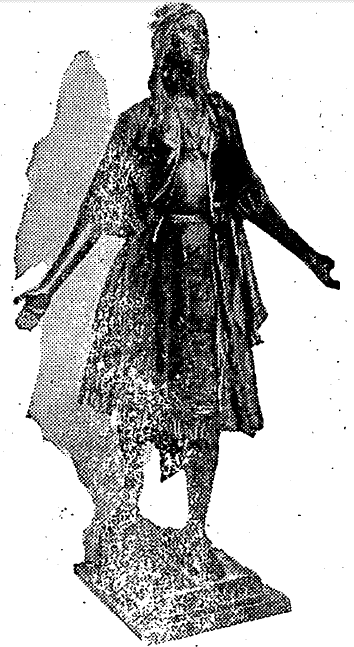 The statuette was not the only Pocahontas-related gift that Edith received while in the White House. Other gifts related to her Native American ancestry included dolls and a portrait of her ancestress presented by the heritage membership organization Colonial Dames.

When Edith Wilson visited England in 1918, this Duluth newspaper article heralded the visit of a descendant of Pocahontas—pointing out it was a little over 300 years since her ancestor made a similar trip. The newspaper article claims: “Only one other American woman [Pocahontas] ever has been received in England with the social and official courtesies which will be lavished upon Mrs. Woodrow Wilson.” The news article goes on to trace Edith’s roots to Pocahontas and even to her early Bolling family tree.

Are you a descendant of Pocahontas? You may be interested in the book Pocahontas’ Descendants: A Revision, Enlargement, and Extension of the List as Set Out by Wyndham Robertson in His Book Pocahontas and Her Descendants (1887), by Stuart E. Brown, Jr., Lorraine F. Myers, and Eileen M. Chappel (the Pocahontas Foundation, 1985).

Gary B. Roberts’ article Notable Kin: Some Descendants and Kinsmen of Descendants of Pocahontas: An Excursion into Southern Genealogy on the American Ancestors website has additional sources you may be interested in.

Whether or not you have Native American ancestry, dig into GenealogyBank’s historical newspaper archives to find out more about your ancestors, discovering the stories that help fill in the details on your family tree.

*Notable Kin: Some Descendants and Kinsmen of Descendants of Pocahontas: An Excursion into Southern Genealogy by Gary B. Roberts. American Ancestors. 1986. http://www.americanancestors.org/an-excursion-into-southern-genealogy/ accessed 11 November 2013.

Wedding Records: Everyone Loves a Rainbow