Introduction: Mary Harrell-Sesniak is a genealogist, author and editor with a strong technology background. In this guest blog post, to celebrate March being National Women’s History Month, Mary provides practical tips to help you search for your female ancestors.

You know that age-old expression, What’s in a name? Well, it means absolutely nothing if you can’t find your female ancestor in any of the records—much less her maiden name.

Since the majority of “dead end” ancestor quests are for women, I’d like to share some overlooked avenues for breaking through those genealogy research brick walls, in honor of Women’s History Month.

(Note: all of the newspaper articles used to illustrate this Blog post come from GenealogyBank’s online Historical Newspaper Archives.)

Tip #1: Know All of Your Ancestor’s Identities

This tip suggests that when searching the women in your family tree, you need to search for every name she ever went by, whether it be a formal first name (given name) or an informal nickname.

Most women, including myself, have multiple identities, depending upon the context.

Someone might have a pet name within the family, a formal name on a birth record, and might also gain a new name in a religious setting. And a woman might also go by one spelling as a child, and then choose to spell her name differently as an adult.

Tip #2: Search All of Your Ancestor’s Titles

Titles aren’t always formal. They can be applied according to the role one takes in the community, and vary from situation to situation. Take, for example, Mary Jane Smith, a popular neighborhood mom in Atlanta. It’s possible some genealogical records only call her Mama Smith, whereas others might name her as Mary Jane Smith.

If a woman wished to compete in a man’s world, she typically used a pseudonym.

Many people have heard of Louisa May Alcott, who wrote the beloved novel Little Women. However, few know that Louisa used the pseudonym A. M. Barnard to publish a series of “potboilers” that were thrilling Gothic stories.

Tip #4: Search by Her Initials

Many assume that men are more prone to be recorded by their initials, but it is common for women also, depending upon the circumstance.

Competing in a Man’s World

Female authors and artists very often use initials to compete in a man’s world.

Mary Jane (Olmstead) Stanton was a suffragette and author who appears in records under the name M. O. Stanton. In this 1890 newspaper article, written when Stanton was involved as a founding member of the Woman’s Press Association of the Pacific Coast, some women were referred to by their initials (Mrs. E. T. Y. Parkhurst), others by their own names (Mrs. Sarah B. Cooper), and one by her husband’s name (Mrs. Sam Davis).

Official government records, such as patents, are sometimes recorded by the inventor’s initials—so if you search only by the obvious names, you’ll miss them.

As a country of immigrants, we shouldn’t be surprised that name spellings vary from country to country, or that a bilingual family might interchange names according to the cultural setting. A woman might be called by her Old World name in the family setting, and recorded in other ancestry records by the more common American spelling.

For example, an ancestor named Mary might also be known as: Maria if your family came from Spain; from the Netherlands, as Marja or Maaike; and if your female progenitor was Welsh, she might also be recorded in records as Mair.

There are more ways to prove a marriage than almost any other event—but many sources for marriage evidence are overlooked. Some will not be found on the Web, so think creatively if you haven’t been able to locate a woman’s maiden name or marriage record.

When I discovered this last genealogy research tip, it was a real “Aha” moment!

If you are looking for a maiden name, use “maiden name” or “maiden name was” as keywords in your search. Notice how many results were returned when I tried it in the GenealogyBank search box: 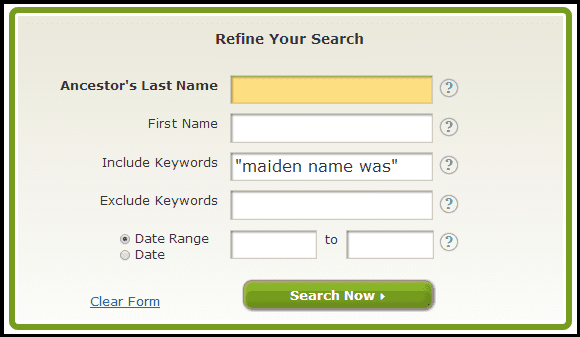 Now incorporate those keywords with a name search, and see what you find! When I entered “Sarah Furman” “maiden name,” this record identifying her as a Strickland appeared—a fantastic research find listing her 260 offspring!

Yes, finding all the genealogy records for your female ancestors can be tough, but employing these eight research tips—plus a little patience—might turn up some solid results for you in your family history searches.

Please share with us in the comments section any successes you’ve had from using these tips, and any additional methods you’ve used to find the females in your family tree.

In this article, Scott Phillips—weary of this long, cold winter—jumpstarts thoughts of spring by planning…
Previous Post