Introduction: In this article, Melissa Davenport Berry writes more about the 1692 Salem Witch Trials, focusing this time on the family connections of Ruthie Stearns. Melissa is a genealogist who has a blog, AnceStory Archives, and a Facebook group, New England Family Genealogy and History.

My last story covered Richard B. Trask’s excavation project of the Rev. Samuel Parris parsonage house in Danvers, Massachusetts, which is considered the nest hive for the Salem witch hysteria of 1692 (see Digging Up Witch Lore in Old Salem Village: The Rev. Samuel Parris Home).

When Ruthie Stearns and I worked together on her Mayflower line for a previous GenealogyBank blog article (see The First Families of America: No Blue Bloods on the Mayflower Part 2), we decided to investigate her witch ties. Ruthie provided records and letters on her father Rev. Howard Oliver Stearns, former pastor of Rev. Parris’ old church, now called the First Congregational Church of Danvers.

Rev. Stearns helped transcribe the sermon notebook of Rev. Parris with James F. Cooper Jr. and Kenneth P. Minkema. The sermons are published on the Colonial Society of Massachusetts website. Cooper is currently digitizing thousands of church records and is a partner in the Rev. Ebenezer Parkman Project. I will be featuring a story on his work with Rev. Stearns and the Parris sermons later.

Rev. Stearns was active on Danvers’ Historical Commission and displayed a deep commitment to the preservation of the local history, which must have been inspired by his spiritual blood ties connected to the history of Old Salem Village. Ruthie has found in the family tree ties to both victims and their accusers during the Salem Witch Trials.

Rev. Stearns believed the people of Salem Village were “enmeshed in one of the greatest calamities of human history.” Ruthie says, “I had no idea how I connected to Rebecca Nurse until I started my genealogy search and found it was through my Towne line. I descend through a Towne brother (Edmund) through his son Joseph down into my Gould line (g grandmother Nettie Florence Gould); and through Edmund’s daughter Abigail Towne Perley down into my Chase line and to my gr. grandfather Willie Dennett Stearns (Nettie’s husband).”

Ruthie discovered over 30 ancestors connected to the Salem Witch Trials. I found some tidbits on a few of her ancestor connections in GenealogyBank’s Historical Newspaper Archives, and Ruthie furnished her family photos and genealogy charts.

In 1955 the “Witch’s Chair,” owned by the Nurse family, was on exhibit as part of the second “Boston Herald Historic Homes” tour. According to the Boston Herald, the 71-year-old Rebecca Nurse was seated in the chair when the constables came to her arrest her. She was later found guilty of witchcraft and executed by hanging on 19 July 1692. The chair is in the collection of the Rebecca Nurse Homestead located on Pine Street in Danvers, Massachusetts.

When Salem (Danvers) held its tercentenary celebration in 1930, ex-President Calvin Coolidge was invited to attend and take part in a reenactment of the trial of Rebecca Nurse.

I also found this photo of the Rebecca Nurse witch trial reenactors in front of the Nurse house in the Times-Picayune paper.

This Boston American article noted that anyone could be a target for witchcraft accusations, and Ruthie’s relation John Alden, a sea captain and merchant, escaped the hanging rope.

Another of Ruthie’s connections, John Bradstreet, was mentioned in the Lowell Daily Citizen and News.

Try a search in GenealogyBank’s Historical Newspaper Archives on your own ancestors connected to the Salem Witch Trials. 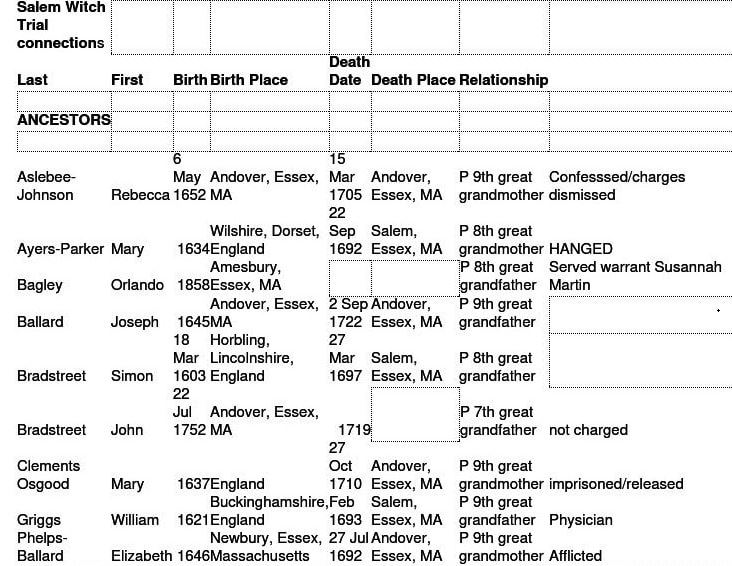 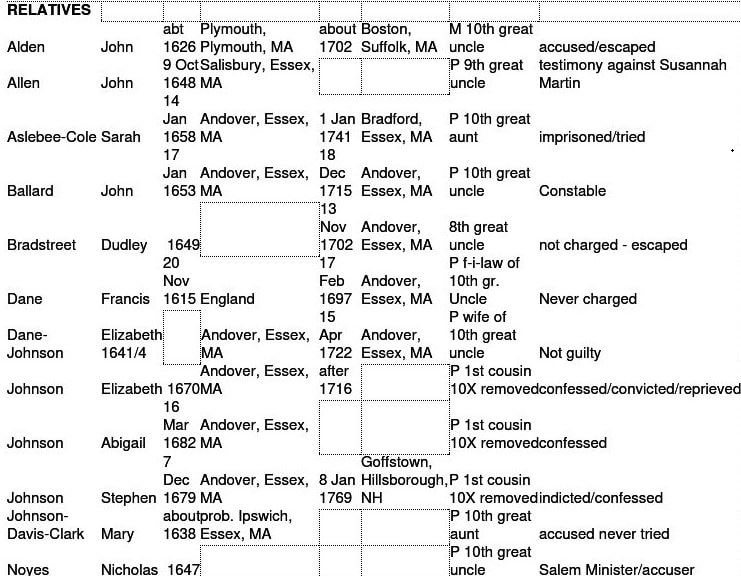 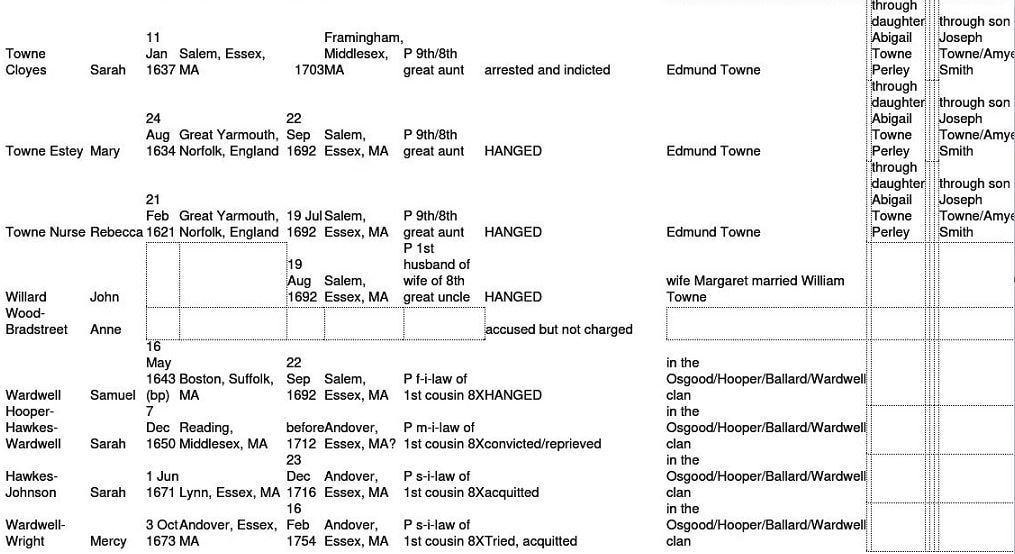 Halloween: How Did You Trick or Treat?

In this article, Gena Philibert-Ortega writes about “trick or treating” from earlier times.
Previous Post

In this article, Melissa Davenport Berry writes about the archaeological dig exploring the Salem Witch…