Introduction: In this article, Jessica Edwards gives tips for finding and using passenger lists in your genealogy research, and provides many helpful links. Jessica has had a lifelong interest in her family’s history – especially on her father’s side, which goes back to the first settlers in Pennsylvania, Jamestown and New England.

When I taught genealogy classes, two of the most common questions I was asked were:

In this article, I have put together some brief “how-to’s” about passenger lists, what information can be found in them, and provided some useful links.

What Are Passenger Lists?

From the 1600s through the early 1900s, most immigrants entered the U.S. by ships. Sometimes, they were counted before they left the port to start their journey – and, if they survived the passage, they were counted again when they landed in America, with their names entered on a ship’s passenger list. These passenger lists contain vital information for ancestor detectives and can include such things as the immigrant’s name, age, marital status, occupation, and nationality.

Most passenger lists have information that will be found on more than one page (recently I stumbled onto this fact when I noticed that a second page to each log had the names and information of what family members they were going to live with, and what town they were going to live in), so read carefully. Some of the other things you can learn from a ship manifest can include: where they sailed from; their last residence; a contact in their country of origin and their relationship; their final destination; how many bags they had; the ship’s name; and how much money they had with them.

Contrary to popular belief, not everyone came through Ellis Island. There were many ports of entry all across the U.S. The main ports were New York, Boston, Baltimore, Philadelphia, and New Orleans, but other places ships arrived were: Portland, Maine; Seattle, Washington; Charlestown, South Carolina; San Francisco, California; Savannah, Georgia; Mobile, Alabama; Providence, Rhode Island; Alexandria, Virginia; and many other smaller ports along the coasts – so don’t ignore the other ports.

What Is Ellis Island?

Ellis Island, now a 27.5-acre site located just minutes off the southern tip of Manhattan Island, New York, is likely to connect with more of the American population than any other spot in the country. It has been estimated that nearly half of all Americans today can trace their family history to at least one person who passed through the Port of New York at Ellis Island. The record for the year with the most immigration was 1907 (1,285,000 people).

Now, more than a century after the peak years of immigration, Ellis Island is one of the most popular tourist destinations in the National Park Service.

The Ellis Island Foundation maintains a free Ellis Island Passenger Search database, home to 65 million records of passengers arriving to the Port of New York from 1820 to 1957.

The arrival of passengers was big news, and newspapers published passenger lists to inform their readers. There are thousands of passenger lists in GenealogyBank’s collection of more than 13,000 newspapers, and even a special Passenger Lists search form to help with your family history research. 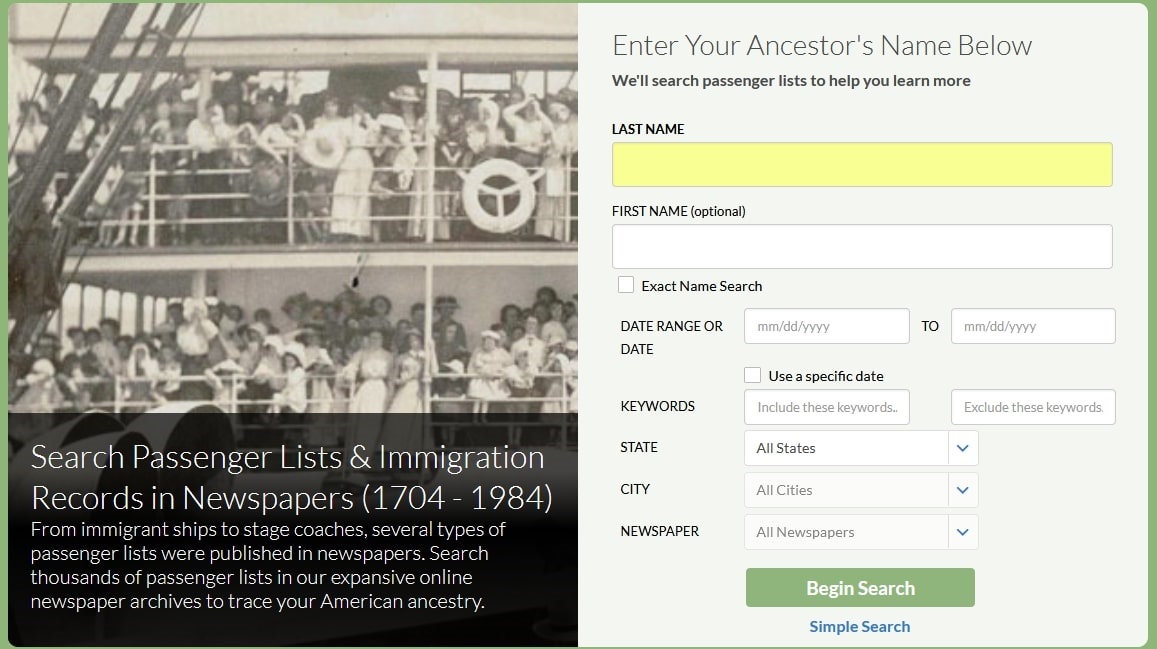 Some Interesting Sites That Relate to Passenger Lists

Check out these sites:

Here are some books that may be helpful (these are just a few, as many, many more can be found at your local public or genealogical libraries or on sites that sell books):