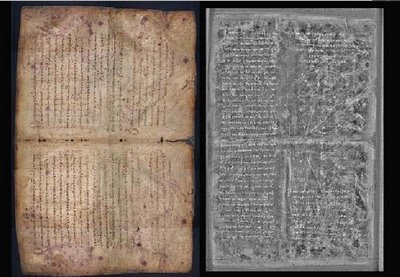 projects to digitize and make available the world’s ancient manuscripts that have long been unreadable. Click here to read her article: The Next Age of Discovery. (Wall Street Journal, 8 May 2009).

“Archivists at the Walters Art Museum in Baltimore used multispectral imaging to read this palimpsest, or text that had been scraped off and written over by a later scribe. The text had been covered up by a 13th-century monk who scraped the parchment with pumice and used the pages to write a prayer book. Multispectral imaging revealed a hidden mathematical treatise by the Greek mathematician Archimedes (above).”

Universities across the country: University of Kentucky, Brigham Young University, Oxford, British Library, Library of Congress, St. John’s Abbey & University in Minnesota, Center for the Study of New Testament Manuscripts (Texas), University of Michigan, Berkeley, Columbia University are all working to preserve the world’s oldest records. They are harnessing 3-D X-ray scanning, NASA multispectral imaging and the latest tools to digitize and preserve the world’s oldest manuscripts.
These projects have saved thousands of manuscripts that were otherwise unreadable and that were slowly deteriorating. 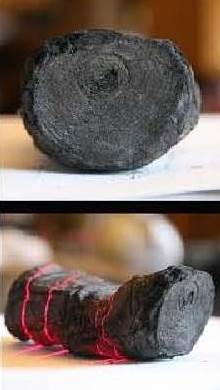 “Brent Seales, a computer scientist at the University of Kentucky, is pioneering the “virtual unrolling” technique for fragile or burned scrolls. Prof. Seales plans to test 3-D X-ray scanning on two papyrus scrolls from Pompeii that were charred by volcanic ash in 79 A.D.”
“Multispectral imaging — originally developed by NASA to capture satellite images through clouds — has proved remarkably effective on everything from ancient papyrus scrolls to medieval manuscripts that were scraped off and written over when scribes recycled parchment pages. Using the technique, which captures high-resolution images in different light wavelengths, scholars can see details invisible to the naked eye: For example, infrared light highlights ink containing carbon from crushed charcoal, while ultraviolet light picks up ink containing iron.”
It’s a great day for genealogy – and the world’s scholars are extending our reach even further back in time with space age technology.
.
Next Post

GenealogyBank has over 250,000 historical documents and books.One of the more popular titles is the…