OK. Results are in.
I now have DNA testing results from three of the major DNA testing companies: FamilyTree DNA, AncestryDNA and GPS Origins.

They each use autosomal testing (taken from both my father’s and mother’s DNA). Additionally, FamilyTree DNA also uses Y DNA testing (male line) which is very precise – but is only for the male line. All of the DNA companies now have autosomal testing to appeal to all genealogists.

My personal favorite DNA site had been FamilyTree DNA because it gives me my exact DNA signature (Y DNA test result) along with the autosomal test results. Let’s see if my opinion has changed.

How do the autosomal tests from FamilyTree DNA, AncestryDNA and GPS Origins compare?

FamilyTree DNA found DNA matches for me in the UK, Sweden, Poland and the Czech Republic.

Because FamilyTree DNA additionally offers a Y chromosome DNA test, it can also tell me the exact degree of relationship (based on DNA markers) for these Kemp DNA cousins it found.

Per FamilyTree DNA, I now have “known” cousins from the Czech Republic, Poland, UK, etc., and their contact information. These individuals were identified because they also took the FamilyTree DNA test. FamilyTree DNA does not have my family tree information – it made these matches based on its DNA testing. Big win.

OK – this is good. FamilyTree DNA pointed me in the right direction and reliably found me “cousins” based on my DNA results. I rate this a solid success.

My AncestryDNA Migration Map shows 89% “confidence” that my ancestry is centered in the United Kingdom – and, with 5% confidence, also in Western Europe which they define as “Primarily located in Belgium, France, Germany, Netherlands, Switzerland, Luxembourg, [and] Liechtenstein.”

This is exactly what my personal genealogical research and long-held family traditions have shown. I have traced my Kemp ancestry from Connecticut to County Cavan, Ireland – to East Lothian, Scotland – then to Kendal, England, and back from there to Flanders in Belgium in the 1300s.

Notice that the AncestryDNA test gives a 2% shout-out to relatives in Finland/Northwest Russia – noting that it is “also found in Estonia, Latvia, Sweden [and] Lithuania” and a 1% finding for Eastern Europe “Primarily located in Poland, Slovakia, Czech Republic” and 14 other European countries.

That’s a lot of possibilities – but, as we see in the GPS Origins DNA test results, those countries are critical to my heritage.

So, both FamilyTree DNA and AncestryDNA are pointing me in the same general direction.

GPS Origins’ interpretation of my autosomal DNA test was more precise then the other two DNA test companies. It stated explicitly that my family origin was from the Czech Republic (today’s geographic reference point) and, before that, Latvia/Belarus.

According to GPS Origins: “At some point before 1277 BC your ancestors moved [from Latvia/Belarus] to Czech Republic… Your [ancestors later] moved to around Spain… between 1277 BC and 311 AD.”

GPS Origins explained why my DNA is found in multiple countries over the last 3,000 years. Now we’re getting somewhere.

Notice the twin migration routes in GPS Origins, with migrations going toward Finland and down to Spain. This is a good fit with the results from the other two DNA companies – but critically, GPS Origins explained the when and where these migrations occurred. It showed me when/where parts of my ancestors – my “tribe” – moved from Latvia/Belarus to Scandinavia and also down to the Czech Republic, then on to Flanders, the UK, and ultimately down to me.

Why is that important?

My father always wanted to know where our family came from “before that.” Over the years, I would have breakthroughs in our family history – pushing the family back in time, tracing them from Ireland to Scotland, down to England and over to Flanders, Belgium. He would then always ask me: “Where were we from before that?” The problem has been that there is no paper trail taking me to “before that.” Over the years, I brought him dozens of books on the Celtic and Germanic migrating tribes, and the history of the peoples going back before medieval times, so that he could study our possible origins.

I have the paper trail – and now I have the DNA results.
Time for some speculation.

There is a large area in Flanders called Campine (pronounced Kemp-in), pictured in red in the map below.

I have assumed/believed that is how we got the surname Kemp, taking our surname from the place where we lived in Flanders – or from the ancient Cempsi (pronounced Kemp-see) Celtic tribe that settled there as it migrated south into the Iberian Peninsula.

Wait – before you laugh me out of the room, let me ask you a question.

He is the author of the Imitation of Christ, “one of the most popular and best known Christian books on devotion.” (Wikipedia)

He was born Thomas Hermerken, but became known in history as Thomas à Kempis (Thomas “of Kempen”) after his home town of Kempen – now in Germany. That area was historically part of Flanders – just a few miles from the Campine region of Flanders. Thomas Hermerken, as a Medieval canon and scholar of the Catholic Church, followed Catholic tradition during his career in the Netherlands and went by his first name: Thomas. To distinguish him from others with that same first name, he used his hometown and rendered it in Latin: Thomas à Kempis.

Could It Be This Simple?

Could it be this simple: my distant “Kemp” ancestor took on the surname Kemp – Kempis – Cempis – reflecting where he lived in the Campine, Flanders, area of Belgium? I know that is where he was from.

Or, was he a descendant of the Cempsi Celtic tribe – and his surname derived from his Celtic tribal heritage?

Was the Campine (Kemp-in) area of Belgium named for the Celtic tribe: Cempsi (pronounced Kemp-see) tribe? Note that, according to the Celtic Encyclopedia, the Cempsi tribe moved from the Czech Republic area to southern France and Spain in about 900 to 600 B.C. – exactly what GPS Origins described.

“Around the 6th/7th century B.C. factions of the Cempsi (Celtic tribe) migrated west through Holland, Belgium and along the French Atlantic coast (Gaul). Then turning south, they arrived in Hispania.” Posted to Camp & Kemp FamilyTree DNA website.

It is a reminder of the familiar Julius Caesar quote: “Gallia est omnis divisa in partes tres” – “All Gaul is divided into three parts.”

The opening sentence of Caesar’s book Commentarii de Bello Gallico (Commentaries on the Gallic War) is:

“All Gaul is divided into three parts, one of which the Belgae inhabit, the Aquitani another, those who in their own language are called Celts, in ours Gauls, the third. All these differ from each other in language, customs and laws.” (Wikipedia)

If so, this pushes my family back into the Iron Age of prehistory – when Gaul was ruled by Celtic tribes. I can hear my father asking: “Where were we from before that?”

Is this nothing more than wishful thinking – mere speculation?
It could be – but until DNA testing is finer-tuned, this is an interesting direction for us to look further into as we study a time long predating surviving paper and other records.

Bottom Line: For me the GPS Origins DNA test lives up to its own hype:

It corroborated FamilyTree DNA and AncestryDNA test results, and took them much further back in time by giving me more precise information about my family history – matching exactly with our family traditions and my research. I am looking forward in the decades ahead to DNA enhancements to further define these conclusions and my speculation.

Are you interested in giving GPS Origins a try?

Uncover Your Ethnic Origins and Find New Relatives with the Most Specific and Accurate DNA Test Available. Save 25% until Friday 5/19/2017. Order Here 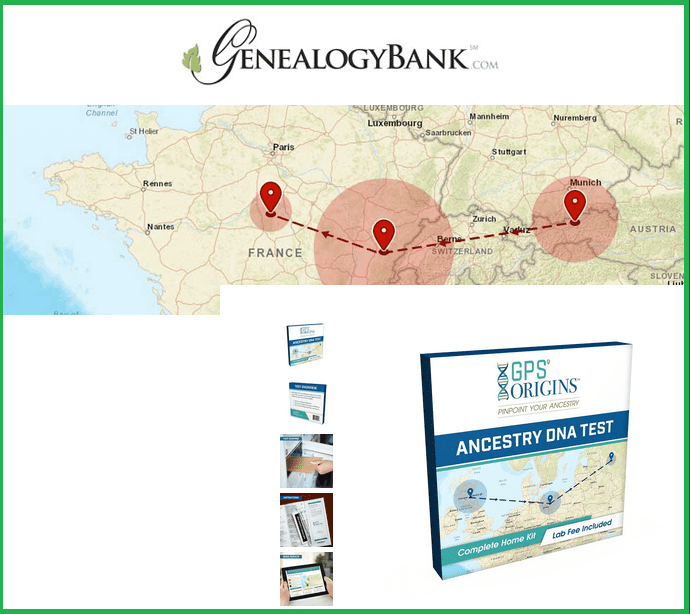 23 thoughts on “My Genealogy Results from Multiple DNA Tests”