Introduction: Mary Harrell-Sesniak is a genealogist, author and editor with a strong technology background. In this guest blog post, Mary presents the fascinating story of Hammet Achmet, who grew up a slave in George Washington’s household, served as a drummer in the Revolutionary War, then became a freedman and drum maker.

Such was the case with Hammet (or Hamet) Achmet (c. 1752, Africa – 1842, Connecticut), who was captured and enslaved as a young child, and later became something of a celebrity—having served as George Washington’s personal waiter.

Achmet grew up in the Washington family’s household as a black slave. However, he was later freed, either for serving in the American Revolutionary War, or according to the terms of George Washington’s will.

In his youth, Achmet had the responsibility of holding his horse as Washington prepared to ride. Achmet was affable and the two of them shared a life-long relationship. As an adult, he attended the Washington family at meals. After George Washington’s death in 1799, Achmet was given a lock of the president’s hair, which he kept in a tiny silver box shaped like a coffin. This treasure, along with one of Washington’s waistcoats and a small rapier (dress sword) with the initials G.W., were heirlooms Achmet carefully guarded throughout his life.

As an African American slave he was never taught to read or write, but Achmet was very intelligent. He could speak four or five languages, a useful skill for anyone in early America with its melting pot of immigrants. Although of a diminutive size (4′ 6”), Achmet served his new country faithfully as a Revolutionary War drummer.

In 1900 his life was chronicled in a book by Emilie T. Stedman, whose family knew him personally. Stedman’s book makes for marvelous historical reading and features her original drawings. You can read her book for free online, Hammet Achmet, a Servant of George Washington, here: https://archive.org/details/hammetachmetserv00sted. 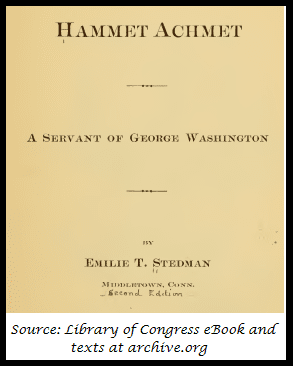 In addition to the interesting information about him in Stedman’s book, we can expand our understanding of Achmet’s story with newspaper accounts that chronicle his fascinating life.

An African American Drummer in the Revolutionary War

Many people today assume that a drummer’s duties were easy during the Revolutionary War—but the music corps, including fifers, drummers, and other musicians, toiled for long days with complicated assignments. Several guides still exist which describe their schedule and music. (See link at the end of this article.)

Up before dawn, the war musicians signaled the wake-up, or “Reveille,” by playing “The Drummer’s Call.” If the troops were going on march, this musical selection reverted to one called “The General.” Because they never knew if the enemy was listening, these easily understood auditory signals reduced the need to call out orders to the troops.

The military musicians had to learn at least a dozen routines because each separate activity, from Roll Call to Assembly, had its own special composition. There were even unique sets for officer activities, and a special one for the Retreat, during which the men received their evening’s orders.

Drummers accompanied or led the troops to battle, acting much like modern-day cheerleaders at a pep rally. Imagine having to focus on playing your music correctly, avoiding injury, and inspiring the trembling soldiers to face the enemy with determined energy! Being a drummer during battle was no easy task, and Achmet performed his responsibilities as well as the best of them.

After the Revolutionary War, Achmet applied for and received a pension (S.38107). His first request was done as a resident of Connecticut on 28 June 1818.

In his pension application, Achmet stated that he had served under Capt. Throop in Col. Return Jonathan Meig’s regiment, and signed the statement with his mark. Supporting statements were made by veterans who remembered seeing Achmet at the Valley Forge Winter Encampment; Phillipsburg, New Jersey; the Battle of Stony Point, New York (16 July 1779); and elsewhere. One wrote this about Achmet:

I saw the same little black drummer who is now before me, marching with said division of said army.

The pension was eventually granted on the basis that Achmet was an invalid (or too frail to work).

Once Achmet was a free man, he made his living manufacturing drums and toys, and selling used shoes to a gun factory.

Some remembered that Achmet would wear his old uniform, and his persistent drumming was often heard. He liked to recount stories about the dinners and grand company held in “Massa Washington’s mansion,” and sometimes showed off the president’s waistcoat.

Their marriage was sometimes a rocky one, as we can infer from this historical newspaper advertisement in which Achmet is warning the public not to trust his wife, stating that he will not pay any more of the debts she incurs!

When Jane sensed her impending death, “she prepared her shroud and mourning for her husband and granddaughter.” This obituary noted she was a professor of religion (meaning a type of preacher, not to be confused with a professor at a school).

Achmet’s second wife, whose name might have been Ann, was Caucasian with darkened skin.

They married at the Methodist parsonage. This young bride had a temper, and after one fight she cut off Achmet’s curls while he slept—a serious affront, as this was rarely done.

Stedman’s book provides many details about Achmet and recounts fun anecdotes, including how he responded when asked to join Phineas T. Barnum’s Circus.

To learn the answer, read the story here: https://archive.org/details/hammetachmetserv00sted

When Hammett (or Hamet) Achmet passed away, this same obituary appeared in numerous newspapers.

Introduction: Scott Phillips is a genealogical historian and owner of Onward To Our Past® genealogy…
Previous Post