Introduction: Mary Harrell-Sesniak is a genealogist, author and editor with a strong technology background. In this blog post, Mary provides search tips to find information about babies in your family history research.

If you think about it, genealogy isn’t about ancestors—it’s about babies, because without progeny or descendants, genealogy simply couldn’t exist. 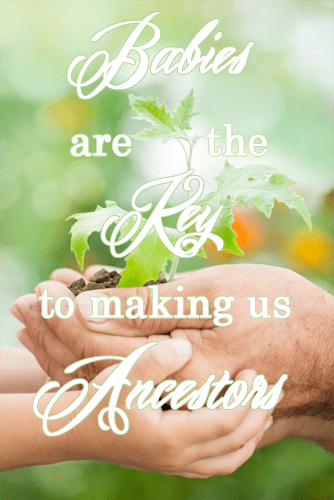 As the new grandparents of baby Eliza, my husband and I are thankful for this, as new family members are the key to making us ancestors!

Fortunately, GenealogyBank has an entire section of its Historical Newspaper Archives devoted to research of these little family blessings. To access this content, select the Birth Records category on the newspaper search page. 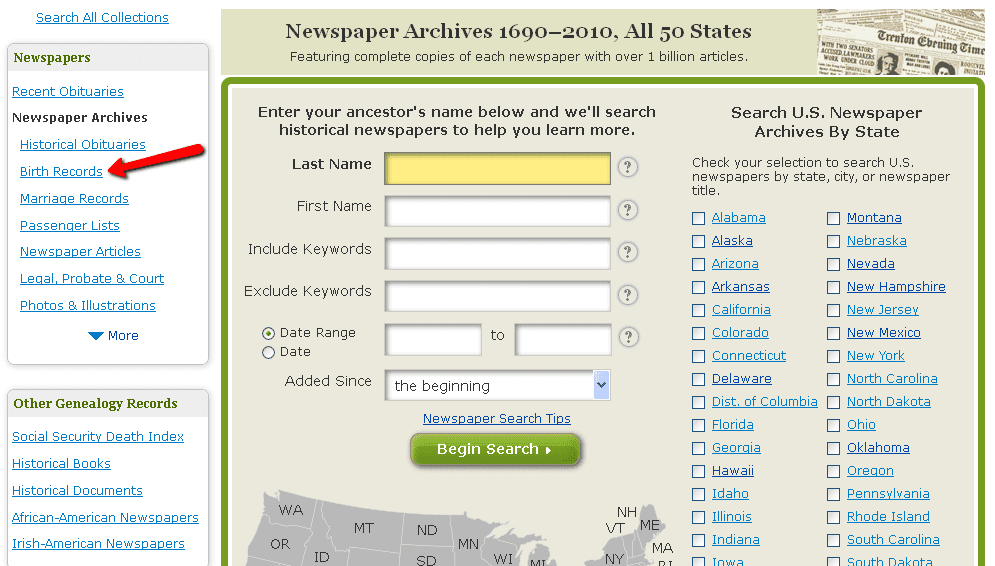 Sometimes you may not find a hoped-for newspaper birth announcement, so I’d like to share some genealogy search tips for better research success.

Family history researchers are often disappointed when a courthouse doesn’t have a birth record. Mainly this is due to civil registration laws, which were instituted at varying times. Even when required by law, many parents and physicians did not comply by registering babies, so early newspaper birth announcements are important resources.

Most birth announcements are placed by parents or hospitals. They often divulge the day of the blessed event, along with details about the parental names and family address. If you are lucky, you may also locate a notice of baptism. In either case, if the announcement was published shortly after birth, then the baby’s name may not be included—so this is a clue to locating an elusive notice.

Genealogy Search Tip: If you can’t find a birth announcement by searching on the child’s name, try searching the parents’ names, the family’s home address—or the date of the birth.

For example, notice that in these birth announcements from 1912 the parents’ names and home addresses are given, but not the babies’ names—in each case the child is only called “a daughter” or “a son.”

Notice that this birth announcement for Nora Maria Meyers states that her baptism was performed at the hospital.

Genealogy Search Tip: Contrary to popular belief, not all baptisms were performed in churches or religious institutions.

Newspaper Announcements by Others

Expand Searches to Other Locations

Most researchers limit searches to a home town, but as seen in the example above, it’s entirely possible that a notice might be placed in a city newspaper where the child was not born. James was born at Camp Pendleton in San Diego County, California, but his birth announcement was published in Dallas, Texas. If the query had been limited to California, the announcement would have been missed.

Genealogy Search Tip: If you can’t find a birth location, consider if the parents were stationed elsewhere by the military.

Although there are exceptions, small town or city newspapers are able to include expanded details about births that larger publications have to eliminate. Some smaller newspapers many even include notices from surrounding areas, such as these birth announcements from a Fort Wayne, Indiana, newspaper published in 1918 that have birth news from the towns of Angola, Waterloo and Warsaw.

Genealogy Search Tip: If you can’t find a birth announcement in your ancestor’s home town, consider if a neighboring town’s newspaper may have published one.

If your ancestor’s family was an immigrant family or lived in a multicultural community, try incorporating foreign terms in your newspaper search for birth announcements. Long ago, many immigrant communities published local newspapers in Old World languages. For example, this 1928 announcement from Maine was published by a French-language newspaper, and reports the births of two sons (indicated by “fils”). I found this birth announcement by searching for the French word “naissance,” which translates into English as “birth.”

Genealogy Search Tip: To learn the equivalent terms for the word “birth” used in foreign-language newspapers, search glossaries or use a translator such as Google Translate.

This Google service will translate the word “birth” into a variety of foreign languages. Now enter the translated word into GenealogyBank’s search box and select the Birth Records category.

Interesting Facts about Babies Found on the Web

If you search historical newspapers you’ll find reports of many unique baby records, including this article from 1893—when a baby weighing 23 ¾ pounds was born to “giants.” He reportedly was 2 ½ feet in length and had a “cute little pink foot” measuring 5 ½ inches. Perhaps this report was a slight exaggeration, as we notice that neither the parents nor the child was named in the article.

100th Anniversary of the Panama Canal: History in the News

Introduction: Duncan Kuehn is a professional genealogist with over eight years of client experience. She…
Previous Post

Every day, GenealogyBank is working hard to digitize more newspapers and obituaries, expanding our extensive…