Elizabeth Gladys Dean was born on 12 Feb 1912. Her parents sold their family business in England and planned to emigrate to America like so many others from the UK before them. 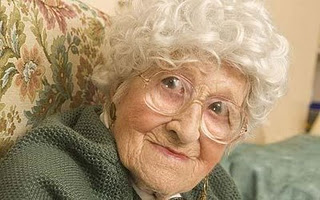 Along with her mother Georgette Eva Dean, father Bertram Frank Dean and brother Bertram Dean they boarded the Titanic just a few weeks later to settle in their new home in Kansas. Her father perished in the sinking of the Titanic and the family returned to England to mourn their loss. 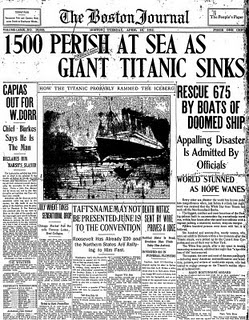 The newspapers of the day gave the grim listss of those that perished and those that survived.
(Boston Journal 12 April 1912)

In fact GenealogyBank has the obituaries and stories of over 1,000 of the Titanic passengers that died in 1912 and the survivors that have died since.

LONDON — Millvina Dean, the last survivor of the sinking of RMS Titanic, died Sunday in her sleep, her friend Gunter Babler said. She was 97.

Babler said Dean’s longtime companion, Bruno Nordmanis, called him in Switzerland to say that Dean died at her nursing home in southern England, on the 98th anniversary of the launch of the ship that was billed as “practically unsinkable.”

He said staff discovered Dean in her room Sunday morning. Babler said she had been hospitalized with pneumonia last week but she had recovered and returned to the nursing home.

A staff nurse at Woodlands Ridge Nursing Home in Southampton said no one could comment until administrators came on duty Monday morning.

Dean was just over 2 months old when the Titanic hit an iceberg on the night of April 14, 1912. The ship sank in less than three hours.

Dean was one of 706 people — mostly women and children — who survived. Her father was among the 1,517 who died.

Babler, who is head of the Switzerland Titanic Society, said Dean was a “very good friend of very many years.”
“I met her through the Titanic society but she became a friend and I went to see her every month or so,” he said.

The pride of the White Star line, the Titanic had a mahogany-paneled smoking room, a swimming pool and a squash court. But it did not have enough lifeboats for all of its 2,200 passengers and crew.

Dean’s family were steerage passengers setting out from the English port of Southampton for a new life in the United States. Her father had sold his pub and hoped to open a tobacconists’ shop in Kansas City, Missouri, where his wife had relatives.

Initially scheduled to travel on another ship, the family was transferred to the Titanic because of a coal strike. Four days out of port and about 600 kilometers (380 miles) southeast of Newfoundland, the ship hit an iceberg. The impact buckled the Titanic’s hull and sent sea water pouring into six of its supposedly watertight compartments.

Dean said her father’s quick actions saved his family. He felt the ship scrape the iceberg and hustled the family out of its third-class quarters and toward the lifeboat that would take them to safety. “That’s partly what saved us — because he was so quick. Some people thought the ship was unsinkable,” Dean told the British Broadcasting Corp. in 1998.

Wrapped in a sack against the Atlantic chill, Dean was lowered into a lifeboat. Her 2-year-old brother Bertram and her mother Georgette also survived.

“She said goodbye to my father and he said he’d be along later,” Dean said in 2002. “I was put into lifeboat 13. It was a bitterly cold night and eventually we were picked up by the Carpathia.”

The family was taken to New York, then returned to England with other survivors aboard the rescue ship Adriatic. Dean did not know she had been aboard the Titanic until she was 8 years old, when her mother, about to remarry, told her about her father’s death. Her mother, always reticent about the tragedy, died in 1975 at age 95.

Born in London on Feb. 2, 1912, Elizabeth Gladys “Millvina” Dean spent most of her life in the English seaside town of Southampton, Titanic’s home port. She never married, and worked as a secretary, retiring in 1972 from an engineering firm.

She moved into a nursing home after breaking her hip about three years ago. She had to sell several Titanic mementoes to raise funds, prompting her friends to set up a fund to subsidize her nursing home fees. Leonardo DiCaprio and Kate Winslet, the stars of the film “Titanic,” pledged their support to the fund last month.

For most of her life Dean had no contact with Titanic enthusiasts and rarely spoke about the disaster. Dean said she had seen the 1958 film “A Night to Remember” with other survivors, but found it so upsetting that she declined to watch any other attempts to put the disaster on celluloid, including the 1997 blockbuster “Titanic.”

She began to take part in Titanic-related activities in the 1980s, after the discovery of the ship’s wreck in 1985 sparked renewed interest in the disaster. At a memorial service in England, Dean met a group of American Titanic enthusiasts who invited her to a meeting in the U.S.

She visited Belfast to see where the ship was built, attended Titanic conventions around the world — where she was mobbed by autograph seekers — and participated in radio and television documentaries about the sinking.

Charles Haas, president of the New-Jersey based Titanic International Society, said Dean was happy to talk to children about the Titanic. “She had a soft spot for children,” he said. “I remember watching as little tiny children came over clutching pieces of paper for her to sign. She was very good with them, very warm.”

In 1997, Dean crossed the Atlantic by boat on the QEII luxury liner and finally visited Kansas City, declaring it “so lovely I could stay here five years.” She was active well into her 90s, but missed the commemoration of the 95th anniversary of the disaster in 2007 after breaking her hip.

Dean had no memories of the sinking and said she preferred it that way. “I wouldn’t want to remember, really,” she told The Associated Press in 1997. She opposed attempts to raise the wreck 4,000 meters (13,000 feet) from the sea bed.

“I don’t want them to raise it, I think the other survivors would say exactly the same,” she said in 1997. “That would be horrible.”

The last survivor with memories of the sinking — and the last American survivor — was Lillian Asplund, who was 5 at the time. She died in May 2006 at the age of 99. The second-last survivor, Barbara Joyce West Dainton of Truro, England, died in October 2007 aged 96.
Reprinted by permission: Copyright (c) 2009 Deseret News Publishing Company

With GenealogyBank.com you may search what happened on every day in history and see what…