Introduction: Mary Harrell-Sesniak is a genealogist, author and editor with a strong technology background. In this guest blog post, Mary uses information from a historical newspaper article—and photos from the Library of Congress—to show how you can read clues from the uniform your Civil War ancestor is wearing in that old family photo.

Are you a genealogist who has an old family photograph of a Civil War ancestor? Have you often stared at that old photo, wishing it could tell you a little bit more about your Civil War ancestor? Well, perhaps it can—if your ancestor is wearing a uniform of the Union in the photo, then that uniform can provide clothing clues you can follow to uncover your ancestor’s rank, position in the military, and perhaps hints of his military service.

Occasionally one finds a reference of such importance in historical newspapers that it rivals (or exceeds) what one might find in a well-written textbook. I was lucky enough to make a discovery like this: a newspaper article that explains how to read Union uniforms from the Civil War.

That news article, “Insignia of Rank in the Federal Army,” is an in-depth guide published during the Civil War. It only discusses the uniforms of Union participants, but illustrates how newspapers assisted our ancestors in describing the war and identifying soldiers by their uniforms, swords, chevrons (V-shaped stripes) and other insignia.

This Civil War military apparel and decoration guide can also be of great help to modern-day family historians in identifying the ranks of ancestors from their old family photographs.

Perhaps you’ll find this newspaper article as intriguing to read as I did. However, because the text reproduces small, I’ve taken the liberty to transcribe it below. You’ll also find illustrative Civil War photographs, such as this one of an African American Union soldier, from the Library of Congress Prints and Photographs Division: www.loc.gov/rr/print/.

Insignia of Rank in the Federal Army.

Now-a-days, when uniformed men are standing at all the corners, and are to be met on all the streets, it is pleasant to know just how to tell at a glance the rank of the wearer and the particular branch of the service with which he is connected. The Philadelphia Inquirer of the 14th inst. lays down rules for thus distinguishing the insignia of rank in the U.S. Army, and we quote as follows:

The highest rank in our army is that of Lieutenant General. Winfield Scott, General-in-Chief, is the only one who occupies this rank at present. The principal distinguishing marks of uniform are three silver embroidered stars on the shoulder strap or epaulette—a large one in the middle, flanked by two smaller ones—a double row of nine buttons on the coat, disposed in threes, a buff sash, a straight sword, and a sword-knot terminating in acorns. A Major General is the same, but with only two stars on the shoulder. A Brigadier General has one star, and the buttons up his coat number but eight in each row, disposed in twos. The Colonel is the highest in rank in a regiment, and wears a silver embroidered spread eagle, having in the right talon an olive branch, and in the left a bundle of arrows on his strap, the buttons on his coat in double lines, numbering eight, at equal distances. 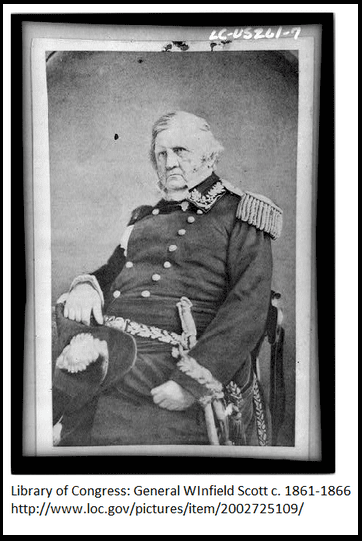 A Lieutenant Colonel is second in command of a regiment, and is known by a silver embroidered leaf at each end of the strap; otherwise his uniform is the same as a Colonel’s. The Major’s is also the same, the leaf being of gold. His duty is to act as Aid-de-camp of the Colonel, and in the event of his two superior officers being disabled or absent, he takes command of the regiment; these three constitute the field officers of a regiment, and are mounted. The Adjutant, whose position is the same to the regiment as that of the Orderly Sergeant to a company, generally ranks as a Lieutenant. 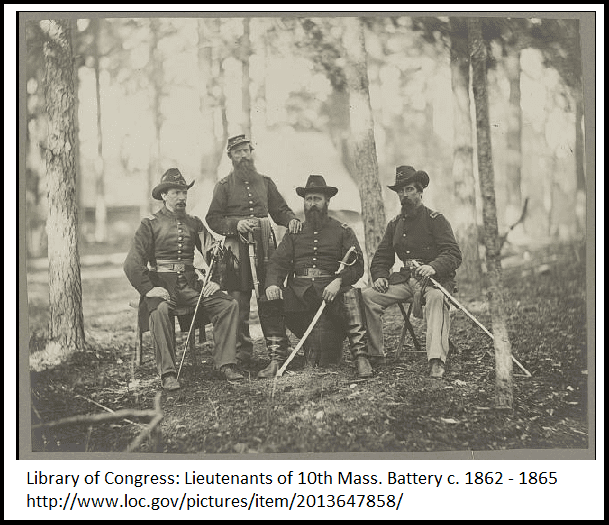 Captains are commandants of companies, and are distinguished by two bars of gold on the shoulder strap, and eight buttons at a regular distance in a single row on the coat; the First Lieutenant is the same, but with one bar on the strap, the Second Lieutenant having a plain strap without marks. These last are called line officers. All regimental officers wear a red sash. 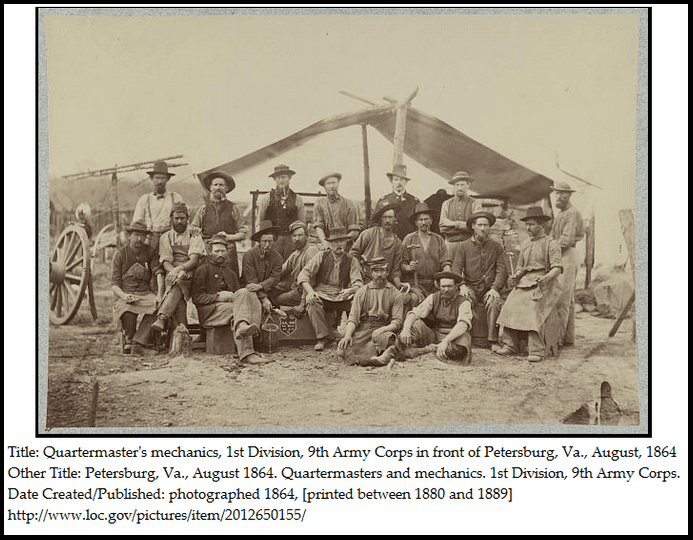 The non-commissioned officers are hospital stewards, whose business it is to attend to the hospital stores, and all the details of the hospital department under the orders of the Surgeon. His insignia is a green band on the upper arm, with a serpent entwined round a winged staff, and embroidered on it.

Chevrons: The rank of non-commissioned officers is marked by chevrons upon both sleeves of the uniform coat and overcoat, above the elbow, of silk or worsted binding, one-half an inch wide, same color as the edging of the coat, points down, as follows:

The Sergeant Major is first sergeant in the regiment, and acts as orderly to the Colonel. He wears three bars and an arc in silk. The Quartermaster Sergeant’s business is the management of the details of that department. He wears three bars and a tie, in silk. The Orderly Sergeant is first sergeant in the company, and commands it in the absence of commissioned officers. The chevron is of three stripes without connection, and a diamond or star above. The Second Sergeant takes charge of half a company, called a platoon, and has the same chevron as the first, but without a diamond. The Corporals are in charge of sections or quarters of a company, and are distinguished by two bars in worsted. 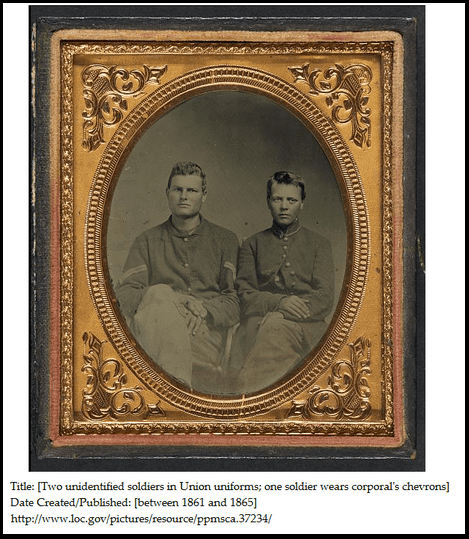 Of the swords, the cavalry sabre is the longest and has a steel scabbard. The field officers come next, the scabbard being of chocolate enamel, with git [sic] trimmings. The line officers’ plainer and shorter, with sheath of black leather. A general officer’s weapon is straight, with a gilt scabbard; regimental staff is straight and short; musicians’ and non-commissioned officers’ being shorter still, and more for show than use.

To indicate service: All non-commissioned officers, musicians and privates, who have served faithfully a term of five years, wear, as a mark of distinction, upon both sleeves of the uniform coat, below the elbow, a diagonal, half chevron, one half an inch wide, extending from seam to seam, the front end nearest the cuff, and one half an inch above the point of the cuff, to be of the same color as the edging of the coat. In like manner, an additional half chevron, above and parallel to the first, for every subsequent five years of faithful service; distance between each chevron one-fourth of an inch. Service in war is indicated by a light or sky blue stripe on each side of the chevron for artillery, and a red stripe for all other corps, the stripe to be one eighth of an inch wide.

The color of the cloth used for the strap of the general staff and staff corps, is dark blue; of the cavalry yellow; dragoons, orange; artillery, scarlet; riflemen, medium or emerald green; and infantry, light or sky blue. 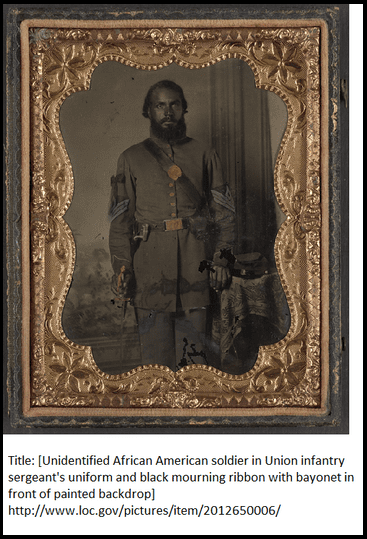 To research Civil War Confederate soldier uniforms and other Union soldier uniforms not illustrated in this article, be sure to visit the Library of Congress’s Prints and Photographs Division at www.loc.gov/pictures/, or visit websites that sell Civil War reenactment supplies.

For example, C&C Sutlery has a number of illustrations showing Civil War uniforms available for purchase that you can refer to in your genealogy research.

Now that you have acquired all of this detailed information about Union soldiers’ uniforms, take another look at that photo of your Civil War Union ancestor. Pay close attention to all the details of the uniform, sword, chevrons and other insignia, and see what they can tell you about your ancestor’s military service.

Please share your Civil War genealogy discoveries in the comments, and tell us about any additional military uniform clues you use in your ancestor sleuthing.