“Hardly a man is now alive

Who remembers that famous day and year.”

In searching through early 19th Century newspapers, time and again we find historical obituaries about the passing of “Revolutionary Heroes,” as America’s newspapers recorded the honored service of those who fought to secure this country’s freedom from England.

This 1851 American Revolutionary War soldier’s obituary of Thomas Hill is a good example.

This soldier’s obituary says of Thomas Hill: “He was in the battle of Concord, and was on Bunker Hill, but not in the engagement.”

Wait—he was there at the battle but didn’t fight?

Why was he given a pension by the U.S. federal government and called a “Revolutionary Hero” in this historical obituary if he was there at the battle but not engaged in the fighting?

Digging deeper in GenealogyBank I found this old newspaper article profiling Thomas Hill when he was 89, one year before he died. It was published in the New Hampshire Gazette (Portsmouth, New Hampshire), 23 April 1850, page 2, giving more details about his military service.

So he was at the Battle of Concord as a 14-year-old boy and also at the Battle of Bunker Hill “with his father and eldest brother Abraham.” They were part of “the volunteer minute men who fought.”

Thomas Hill went on to fight in “two campaigns in the Jerseys and New York.”

Thomas Hill was honored along with “four other survivors, being all that could be found in the country around who were active in the scenes of 1775.”

And honored he was—the historical newspaper article went on to say: 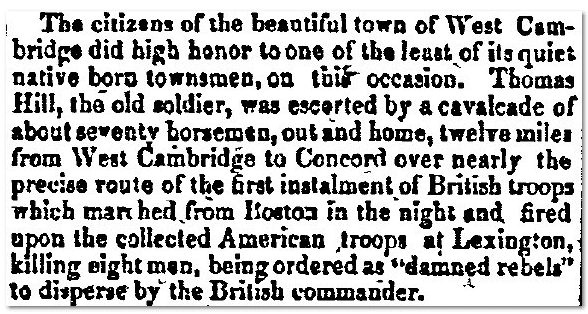 We can picture the old Revolutionary War veteran being escorted by the grateful citizens of West Cambridge over the same route used by the British when they attacked Lexington and Concord.

It calls to mind the words of the poet Longfellow:

“Listen my children and you shall hear

Of the midnight ride of Paul Revere,

On the eighteenth of April, in Seventy-five;

Hardly a man is now alive

Who remembers that famous day and year.”

Longfellow’s immortal words were published in January 1861, 11 years after the 1850 tribute to Thomas Hill. Perhaps he was inspired by this celebration honoring Hill and the other four remaining men “who remembered that famous day and year.”

GenealogyBank gives us the key opportunity to dig in and find the details of the thousands who served as soldiers in the American Revolutionary War. Search GenealogyBank’s newspaper archives and document your ancestors—don’t let their stories be lost.