Introduction: Mary Harrell-Sesniak is a genealogist, author and editor with a strong technology background. In this guest blog post, Mary searches old newspapers to find some of the cute, funny, and heartwarming letters our ancestors wrote to Santa Claus.

In our genealogical quests, we often overlook valuable sources of family history—such as time-honored childhood traditions like writing to Santa Claus (once known as Saint Nicholas).

I recommend you include “Letters to Santa,” published in hometown newspapers, as part of your genealogy research. Can you imagine finding a letter to Santa Claus written by Grandma or Grandpa when they were tots? It would certainly bring a jolly twinkle to your eyes this holiday season!

Yes—it’s very possible that you might find a letter to Santa your ancestor wrote in the historical newspaper archives—and you might even find one with a home address!

Fact: Many Letters to Santa Were Shipped to the North Pole

The U.S. Post Office, not knowing what to do with the abundance of letters to Santa they received throughout the Christmas season, often shared them with newspaper publishers. After air travel became feasible, many letters were (and still are) sent to the North Pole in Greenland, often causing overtime for postal workers. This article from 1950 reports that as of mid-November that year, over 70,000 letters had been received in Copenhagen, Denmark; by Christmas they were expecting about 200,000.

Here is an early letter to Santa published after the 1887 Christmas holiday. Although it doesn’t reveal “Tom’s” surname, it has an interesting description about the custom of using a chimney post office for the children’s letters.

The little boy made it clear he didn’t care for peppermint sticks, and had some interesting requests—including this instruction to Santa: “Don’t put my things in Jim’s stockings. My stockings are red, with holes in the knees.” Tom also advised Santa Claus: “Ma and Pa are always foolin’ about Christmas Eve, but come along and don’t mind them.”

The previous letter to Santa seems more of a novelty, as it was published in the newspaper after Christmas. Around the turn of the century, delightful children’s correspondence to Santa became a regular feature in many newspapers in the United States, and their letters were printed in the weeks leading up to Christmas. In the following 1899 newspaper article, you can read these letters to Santa:

Albany, Tex., Dec. 15.—Dear Santa Claus: Will you please send me a doll, if you have one to spare? I want one eighteen inches long, kid body and bisque head, light hair or dark will do. Yours truly, BESSIE TILGHMAN.

Oak Cliff, Tex., Dec. 15.—Dear Santa Claus: Please send me a toy cannon, train, magic lantern and a small boat, some candy, nuts of all kinds, apples, oranges and some fireworks. I am a little boy 6 years old. Your little friend, JULE BERAND.

Dallas, Tex., Dec. 17.—Dearest Santa: Though I look older, I am only 4 years old. I don’t want a doll, but I want a watering pot and a carpet sweeper, and some ginger-snaps and jaw-breakers. Yours lovingly, BROOKSIE T. SMITH.

Notice the letter authors are clearly identified by first and last name. Are any of these letters to Santa written by your ancestors?

These children had been very good all year, one performing night work and carrying in meat, and the other who didn’t want her five-year-old brother Tony Ostan forgotten.

As we all know, many families have a tough time at Christmas. Not wanting to disappoint their children, Mom and Dad often make up cover stories to explain the lack of presents, as shown in the following letters to Santa Claus.

In 1919, the Christopher children wrote that they were sorry Santa’s reindeer were sick, and that he wouldn’t be coming this year. However—just in case—Almira did wish for a coat, hair ribbon, dress, cap, shoes, fruit and nuts, and some other items, including a little piano.

Among the presents Kenton hoped for were a popgun, new suit and cap, an auto, bicycle, football suit, and a tree. He also added, “Do not forget to leave something for my sisters, brother and parents.”

Some letters to Santa are purely fun, such as this one from a little girl who lived in Marietta, Georgia:

Dear Santa Claus—Christmas, I want you to bring me a doll that walk, talk and sleep. I want a pair of skates, and I want a box of water colors. Please bring some fruits, nuts and candy of all kinds. There is one more thing I want and that is a raincape. I won’t ask for anything else, because there is lots more little boys and girls that you have to see, but remember mother, daddy, brother and my little baby sister.—Your friend, Ruby Grace Coker.

With so many children’s letters to Santa sent to newspaper editors, the competition to be published was fierce. Not wanting to disappoint, some newspapers created contests—such as this one from the Heraldo de Brownsville newspaper, which offered a first place prize of $5 and a second place prize of $3, with six runners-up to receive $1 each. (I wasn’t able to locate the winning entries, but perhaps some of our readers would find them and report it on the blog.)

Letters from the Echo of Richardson, Texas (1941)
In this collection of letters from 1941, many children told Santa Claus that they love him. (Don’t we all!)

Dear Santa Claus: I have been good. Please come to see me. Fill my stocking with fruit and candy and toys. Don’t bring me very much, but don’t forget other boys and girls. I love you, Ray Johnson.

Dear Santa Claus: I have been good. Please come to see me. Fill my stocking with fruit and candy and toys…I love you, Sylvia Jean Terry.

There are so many letters to Santa Claus in the newspapers, I hope you’ll take time to research them—and please let us know when you find any of these priceless family treasures!

Try entering your ancestor’s first and last name in combination with “letters to Santa” or “letter to Santa” in the “Include Keywords” field on GenealogyBank’s Newspaper Archives search page to get started. 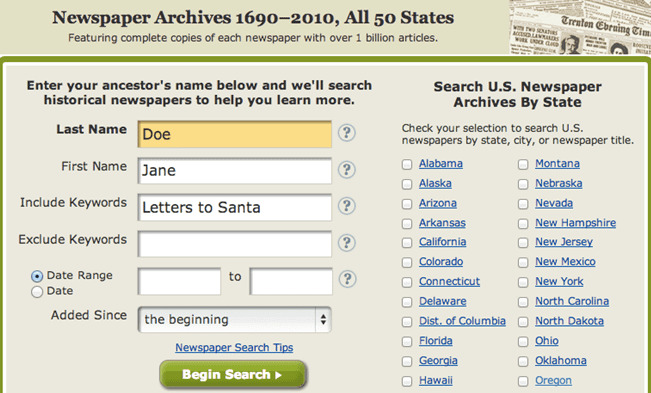 You might also try searching for your ancestors’ letters to Santa from the Newspaper Letters search page. 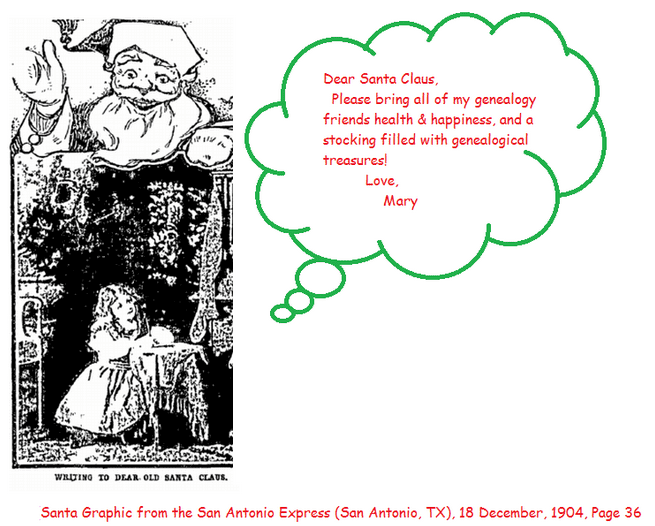 Hope you have a wonderful holiday season!

In this article, Gena Philibert-Ortega searches old newspapers to find some details about the daily…
Previous Post

Christmas Presents of the Past: the Strange, the Unusual—and More

Introduction: Scott Phillips is a genealogical historian and owner of Onward To Our Past® genealogy…