The National Archives and the Library of Congress announced today that they have begun loading digital copies of their materials on a new site called the World Digital Library.

Archivist of the United States Allen Weinstein and Librarian of Congress James H. Billington announced today that the National Archives and Records Administration (NARA) has become a founding partner in the World Digital Library (WDL).

NARA will contribute digital versions of important documents from its collections to the WDL, which will be launched for the international public in early 2009. 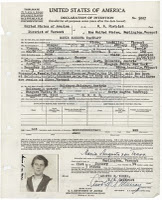 These documents include Civil War photographs, naturalization and immigration records of famous Americans, the Declaration of Independence, the Constitution of the United States, the Bill of Rights, the Emancipation Proclamation, and photographs by Ansel Adams, Dorothea Lange and Lewis Hine. Examples of the images that NARA is contributing to the World Digital Library are now available online.

Example of a naturalization document – Declaration of Intent of Maria von Trapp, 01/21/1944 – that was put online by NARA. NARA ARC Identifier 596198.

The complete run of the American State Papers is already available on GenealogyBank. See GenealogyBank’s Historical Documents collection where you will find military records, casualty lists, Revolutionary and Civil War pension requests, widow’s claims, orphan petitions, land grants and much more including the complete American State Papers (1789-1838) and all genealogical content carefully selected from the U.S. Serial Set (1817-1980). More than 146,000 reports, lists and documents. GenealogyBank has the most comprehensive collection of these US Government reports and documents available to genealogists online. GenealogyBank is adding more documents to this collection every month.

Proposed in 2005 by the Library of Congress in cooperation with UNESCO, the WDL will make available on the Internet significant primary materials from countries and cultures around the world. The project’s goal is to promote international understanding and to provide a resource for use by students, teachers, and general audiences.

“We are pleased that our fellow Federal cultural institution, the National Archives, is joining the Library of Congress in the early stages of this project,” said Billington.

“NARA’s participation not only will ensure that the World Digital Library contains a full record of the American experience, but it also will encourage archives around the world to join with their counterparts from the library world in this important initiative.”

“The mission of the National Archives is to make U.S. Government records widely accessible,” said Weinstein. “The World Digital Library will be a valuable conduit for us to share some of our nation’s treasures with others around the world. We look forward to working with the Library of Congress on this important project.”

In addition to NARA and the Library of Congress, the WDL project partners include cultural institutions from Brazil, China, Egypt, Israel, Russia, Saudi Arabia and many other countries. Click here for more Information about the WDL.

The Library of Congress, the nation’s oldest Federal cultural institution, is the world’s preeminent reservoir of knowledge, providing unparalleled integrated resources to Congress and the American people. Founded in 1800, the Library seeks to further human understanding and wisdom by providing access to knowledge through its magnificent collections. The Library seeks to spark the public’s imagination and celebrate human achievement through its programs and exhibits. In doing so, the institution helps foster the informed and involved citizenry upon which American democracy depends. The Library serves the public, scholars, members of Congress and their staffs through its 22 reading rooms on Capitol Hill. Many of the rich resources and treasures of the Library may also be accessed through its award-winning web site and via interactive exhibitions on a new, personalized web site.
.

This just in - Viewer Mail

Hi Tom, I really do need to share with you GenealogyBank‘s latest contribution to my…